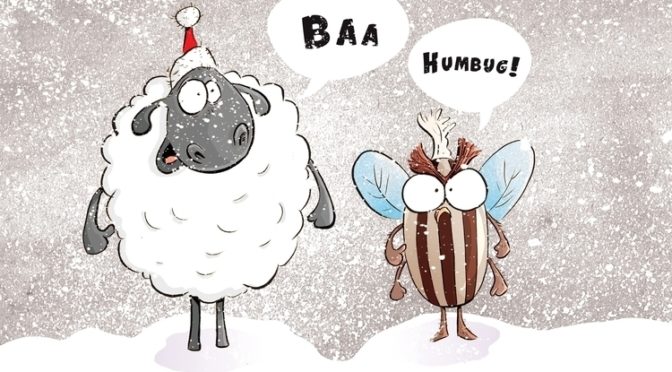 Well, Friday at the ‘Cullis was an interesting evening. We arrived to find that the pub has changed hands since we were last here, and they’ve done it up a bit. In fact, there’s even a nice little drum riser, which should nicely enhance our professional rawk’n’roll credibility. And now that I’ve got my new amp back from the doctors, I have an impressive six-foot high stack of backline, which I think also helps to substantially enhance our professional rawk’n’roll credibility.

And then Rosa turns up, wearing a red hooded Christmas cape trimmed with white fur. “I found it in the children’s section in TK Maxx”, she giggles. “Isn’t it fantastic?”

Well, yes, she does look very cute, but that’s pretty much the end of our newly-found professional rawk’n’roll credibility.

Oh well, not to worry, at least we still sound great.

Right up until we start the first song, anyway. We play through the first verse and a half, and something is very wrong, but I can’t quite put my finger on it. Are we playing just a bit to slow? Is the bass mix set all wrong?

Suddenly Stuart stops playing and puts down his sticks. “I know what it is!”, he says, “I was playing a different song…”.

And so he was.

At the second attempt, things go much more smoothly, and do so for three more whole songs, until Ben bass suddenly goes completely silent. We finish the song without him, while he frantically unplugs things and plugs them back in again, and somehow he is working again just in time to start the next tune. (A lesser scribe would, at this point, insert the word “Unfortunately”. But not me).

(Oh, all right, I’m sorry, I didn’t really mean that, but I simply couldn’t resist…).

The rest of the night goes off without major incident, and ends up as usual with jolly dancing around, and – a nice treat – no falling over, this time. But only just.

Saturday night, and as Rosa is away in Bath with the jazz pixies, for our gig at the Tern in Yate, we have an excellent stand-in in the shape of talented daughter Lily B.

This time, Stuart is minded to play the songs in the correct order off the set list, which makes things rather easier. Lily (as usual) does a fantastic job, getting the crowd up and dancing about, wearing silly sunglasses, falling over, and singing along at her command, thanks to the incredible power of handing out stickers to reward them for their obedience. Thus it is that the lucky individual who Lily judges won our drinking contest is awarded the coveted “Designated Drinker” sticker, a couple of well-deserved “Backing Vocalist” stickers are presented, and a fifty-year-old bald man goes home proudly wearing one declaring him to be a “Foxy Chick”.

A jolly fine evening, and thanks from all of us to my wonderful Lil for stepping in. I think she rather enjoyed herself… 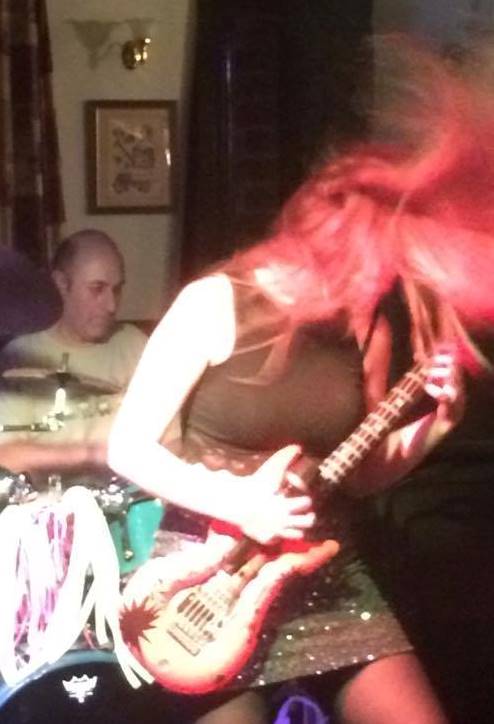 Coming up this week

Friday 23rd – The Farmhouse, Yate
Back to Yate again, this time with Rosa as usual. We’ve not been to this one before, but I think it’s quite a large place, so hopefully they’ll be adequate room for prancing about like a big Jessie in front of a stack of amplifiers.

After that, our final appointment for the year is on New Year Eve…

Dec 31st – Queen Vic, Stroud
One of our favourite places to play anyway, but this time we suspect with added extra dimensions of silliness. And – this idea literally just arrived in my head while typing – maybe we should do this one in fancy dress. As of this moment, we are open to suggestions as to what we should dress as – all ideas will be carefully considered. Oh, except one – we will not be playing the gig dressed as “Naturists”. This by popular request. And because we don’t think we’ll be able to persuade Rosa to part with her new cape. So before you suggest it, think it through…

And that, my dear friends, is just about it for this year.

We hope you’ve had a fantastic time this year, and that you’ll have an even better one next year. So, for the last time in 2016, it just remains for me to say…