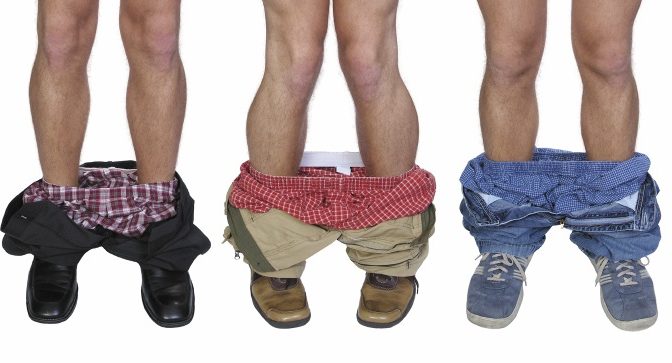 Well, that weekend was… interesting…

Saturday night at the Whitchurch – which did indeed, as expected, turn out to be in Whitchurch –  a large pub, where we are allocated  just enough space to set us up in, and a noticeable fashion vibe – we counted at least six young ladies all wearing the same ripped-jeans and leopard skin print top outfit. It must be a Whitchurch chic thing.

The crowd were a mixed bunch of the moderately interested, and the fanatical manic dancing about, but by the start of second set the latter faction clearly had the upper hand.

When we got to the stage where the inflatable guitars come out, however, things took a turn for the bizarre. One of the punters, a gentleman standing right in front of us (whom I estimate was in his fifties) having taken receipt of an inflatable axe, decided partway through a song that his enjoyment of the evening would be significantly enhanced by dropping first his trousers, and then his stained blue underpants.

He proceeded to continue gyrating, apparently attempting to swing his far-from-impressive member in time to the music, presumably to act some kind of phallic metronome to assist Stuart’s timekeeping. Alas, it was actually really rather difficult to see it, so in fact the exercise was of very little practical use.

To her eternal credit, Emma managed to get through the rest of the song without actually suffocating – we did exchange meaningful glances, but only very briefly in case one of us died from asphyxiating on suppressed giggles.

We were saved by a very nice lady who emerged from the back of the crowd, and hoisted the gentleman’s trousers back up from behind; I was going to say here to restore his dignity, but alas it was a little late for that.

The rest of the gig passed without further genital mishaps, and after calling last orders and a couple of encores we were able to pack up; but not before going to thank our trouser-hoisting heroine.

Final comment on the incident from Stuart; “Well… we haven’t had one of those for a long time…”

Following this comment, it is some time before I can breathe properly again.

Right then, coming up this weekend – just the one, but it’s a doozy – and hopefully without any genitals being waved at us…

Saturday 9th – Queen Vic, Stroud
Always enjoy it in here, there’s plenty of space for being lively, a good crowd, and usually some lovely mates show up from various quarters. I might even see if my dear Dem is fit enough to be taken out. You have been warned.

Finally, as we were leaving the Whitchurch, I had a request for our dear Emma.

“Emma, darling, could you do me a little favour?”

“When you get home tonight, you’ll probably grab something to eat..”

“..maybe a quick shot of JD or something to wash it down..”

“Well, when you go to bed, and you put your head down on the pillow and close your eyes…”