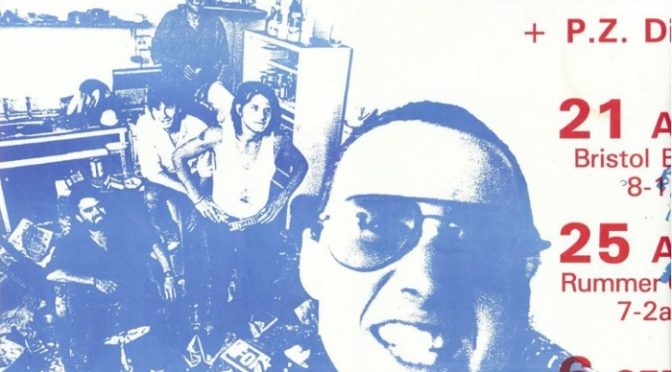 Well, it’s been a very exciting week in rock, and no mistake. (Well, there have of course been a few mistakes – but these were only of the usual fumble fingered musical nature, which we like to attribute to the naturally exciting and spontaneous creativity associated with live music. Ahem.).

Saturday morning dawned fair and bright, and I shambled out of bed to get everything together for our lunchtime hippy-prog set at the Banshees MC charity day bash, with old chums the All Night Chemists – where in a couple of the songs, there are epic-sounding guitar solos when I get to use all my effects pedals at once! It’s very exciting, and not at all coincidental that I wrote those ones…

We’d been promised that there would be a stage, PA, drum kit and backline equipment ready and set up for us, so we would only need to take “guitars, leads, and a pair of drumsticks”.

It came as no great surprise that ten minutes after arriving there, we were haring back to Ian’s house (luckily not far away) to pick up his bass rig. Fortunately I am of a suspicious nature, and already had all my amps and speaker cabs in the van, “just in case”…

I think it’s fair to say that the venue was quite a big field, and they probably would not have had too much trouble squeezing a few more audience members in; nonetheless, I think we rather enjoyed ourselves. This “select and exclusive” attendance figure also meant that when vocalist Rich asked “Are there any Hawkwind fans here?”, the unsurprising lack of response meant he could then announce, “In that case… This is a song we wrote called ‘The Right Stuff’…”.

We even received two unsolicited testimonials; one from a professional sound engineer friend of ours, who declared us to be “Surprisingly awesome for that early in the day”; and one from Rich’s girlfriend – who actually knows what the songs are supposed to sound like – who told us it sounded pretty much up together, and that she “only had to put her fingers in her ears once”.

There was a momentary pause before Ian and I chorused, “For an hour…”

Back home, a rapid re-loading of the van, some food, and then back off downtown to Molloys, where AUF have been asked to play early “because of the boxing”. It seems the original intent was that we would play early, so we could be finished before the match started. However, for reasons unknown, this morphed into us playing the first set, and then being told 2 songs into the second set to stop immediately as “It’s starting, it’s starting!”. This left us hanging around until it finished – so we stood there hoping either that one of the pugilists would get knocked out immediately, or that his mum would come round and unceremoniously drag him off home by the ear hole, delivering a lecture on the way about how Nice Boys Don’t Get Into Fights. [Editor’s note: and not forgetting having to wait for the football to end before we could setup, a kind sports sandwich sort of night]

Neither of these happened, so we had to hang around until it was over, and then play a quick half hour set before packing up and buggering off home in search of a drink with all haste.

However, the very very good supremely excellent news is that this week – after some months of what my dear Dem rather uncharitably referred to as my “trawling the internet looking for floozies”, we have finally secured the services of a permanent replacement singer – the superbly awesome Emma, who we will be telling you more about in the coming weeks. We’ve obviously got some rehearsing to do to get everything up to speed, but as soon as we can we’ll be up and running. We think it’s going to be magnificent fun. In the meantime, Lily is continuing to do a fantastic job for us. We’re extremely lucky to have her around – although, obviously, she’s extremely lucky to have us, too. I’m allowed to say that, because she doesn’t pay me any rent.

Coming up this week – an absolute hoot of a gig…

Friday 5th May – Queen Vic, Stroud
They do like a bit of dancing around rawk’n’roll madness in here. So that’s what we’re planning to give them. I have a sneaky suspicion my dear Dem may come along to this one, if only out of scientific curiosity to see what guest beers they have in. You have been warned.