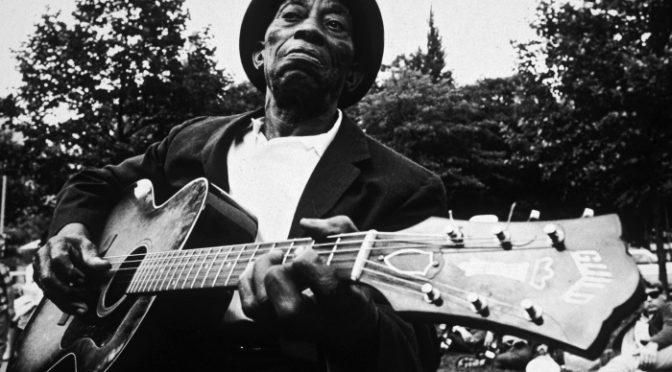 Maybe it’s time I took to playing slide guitar instead, sitting on my back porch in a rocking chair and playing s-l-o-w blues riffs. Thing is, I’d need to get a dog, probably – I suspect it’s written somewhere in the Blues Byelaws.

Of which there are quite a number, come to think of it; for example, the list of permissible Blues Beverages (permitted: black coffee, red wine, bourbon whiskey; forbidden: Lucozade, chai latte, Prosecco).

Also, the official blues working hours aren’t too great either – you have to work every day, from seven to eleven, and then take all your money home to your darlin’ – who then is obliged by the Rules Of Blues to go out on the town every night, messin’ round with another man. It sounds quite exhausting for both of you.

Plus it seems you have to spend an inordinate amount of your time standing on lonely street corners in the pouring rain. Presumably waiting for the bus, because she’s buggered off cruising around in that vintage Mustang you bought her the other week.

Hmmm – maybe on balance, going out a couple of times a week armed with a bank of amplifiers, a rubber chicken and some plastic bath ducks, and a coterie of like-minded loonies isn’t such a bad deal after all.

Friday’s jaunt to the Railway Tavern in Fishponds was jolly good fun, after a moderately well-behaved start we ended up with a fairly riotous end to the night; and I got to road test my new signal compressor pedal, which does what it’s supposed to do rather nicely – even though, as Ben suggested, just the one may not be enough….

Saturday, and an adventure down to Marlborough to the Royal Oak; the few times we’ve played there before, it’s been conspicuously quiet, and we were more or less playing with ourselves, which sounds a bit wrong; but not as wrong as the alternative description, which is that we were playing with each other.

In any case, this time it was rather busier than usual, and enlivened by a stag party – who had, unaccountably, come up from Brighton – and who, for some arcane reason, dressed up their stag as a Morris dancer. We stole his hat, and Stuart revealed his hitherto unexpected Hat Mojo…

Thursday 18th – Royal Oak, Chipping Sodbury
Always a good laugh, and particularly when nobody has to get up for school the next morning. Rather looking forward to it…

Saturday 20th – Kingswood Entertainment Centre
I’d never even heard of this place (or indeed, the entire concept) before we got the booking. Ever wondered what folks in Kingswood do for entertainment? We’re about to find out…

Thas’ your lot for now