Well, another three-gig weekend, there really is no rest for the wicked, and we have clearly been very naughty indeed…

Friday at the Back Bar in Weston was rather good fun – we were warned that apparently sometimes it gets really busy, sometimes it doesn’t – and this turned out to be one of the “doesn’t” nights – still, we had a good giggle, and everybody that was there seemed to be thoroughly enjoying themselves, so that’s all right then.

Unbeknownst to me, helpful daughter Lil had decided to sharpen all the knives in the kitchen on Friday. I found out, though, when making dinner – I pretty much sliced the end off a finger.

Happily it was on my right hand, so I figured it wouldn’t affect my playing – until I got to one of those right-handed Eddie-Van-Halen-style-showoff-hammer-on solos at which point I suddenly remembered. Ouchie.

It did make rather a mess, though – I have subsequently found blood spattered on my guitar, amp, leads, equipment cases, and – inexplicably, van windscreen. Although maybe I just ran somebody over and didn’t notice.

Saturday at the Golden Fleece was definitely a more vigorous affair; having spent an hour or so during the day applying my soldering iron to the wiring on Ben’s bass it was back up to full functionality; unfortunately I couldn’t do anything about his voice – which has almost completely disappeared due to the ongoing infestations currently plaguing most of the band.

I’m not saying I wasn’t prepared to have a go, but for some reason he seemed very much against the idea of me opening up his chest cavity to check for loose wiring.

Thus it was that had to rely on the crowd for her backing vocals, a task to which they rose admirably. We noticed one particularly enthusiastic, and rather attractive, young lady, whose dancing intruded onto the stage several times.

Mid-song, she bellows into Emma’s ear “I love you!”

“Well, that’s nice, sweetheart, and I love you too” replies Em diplomatically.

“No, you don’t understand”, replies the young lovely, gazing deep into Emma’s left ear. “I REALLY love you”.

Five minutes later, the young lady in question – who we are beginning to suspect may have been drinking – suddenly collapses into a chair and passes out.

She manages to sleep right through the second half of “Sweet Child Of Mine” – which is no mean feat, it’s a bit noisy – and we become slightly concerned for her safety. Em captured the two sides of the scene rather well… 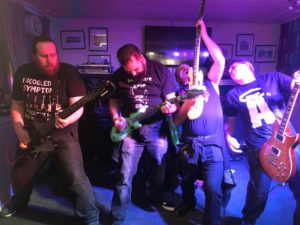 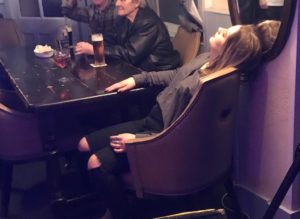 Dutifully, as we play the last few numbers, to check on her health, I make sure she’s still breathing by keeping a close eye on the rhythmic rising and falling of her breasts.

Between each song, I relay the health monitor status to Emma.

“Excellent. By the way, have you named them yet?”

This thought had not occurred to me.

“Er… no. But I have chosen a favourite one”

“The nearest one. Actually, I know, I’ll call them both Barbara, to avoid confusion”

“Good call. Are they still going up and down?”

Finally we run out of encores to play, and the young lady’s friends finish dancing, and scoop her up to take her home. Fondly we wave her and the Barbaras goodbye.

As expected, Sunday afternoon at the Bulldog in Filton was a rather more subdued affair, enlivened only by a chap who kept on coming to stand right in front of the stage, sticking his fingers in his ears, and mouthing the words “It’s too loud” at us. At first I thought he was actually expressing an opinion, but after third time, when he stood right in front of the speakers for a full five minutes doing this, I realised that this was in fact what in his world passes for witty repartee – and having found something which amused him, he was reluctant to let it go; in fact, it seemed to keep him happy for a full two hours.

Takes all sorts, I suppose…

Anyway – no gigs coming up this weekend, so with a bit of luck, by the time we get there, we might actually have everybody fit and well.