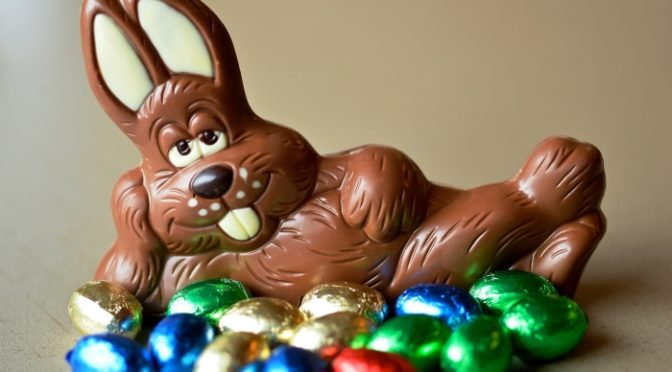 We hope you had a pleasant Easter weekend, that time of year when we all reflect sombrely on how Our Lord Jesus Christ died for our sins, and then came back from dead to hop around the countryside with a basket of chocolate eggs to distribute amongst the children. Or something like that, anyway – I didn’t really pay attention in school.

Well, it was certainly a busy weekend from the rawk’n’roll point of view; Friday’s jaunt to the Air Balloon in Filton turned out to be very lively indeed – so much so that at least some of the regulars have earned themselves the epithet “Air Balloonies”. They didn’t even seem to mind that at least some of us (okay, me) were playing in a particularly ham-fisted fashion. In my defence, I’d just driven up from deepest darkest Devon, had hardly slept, and was sporting a particularly nasty head cold… nonetheless, you’d think I’d know where at least some of the chords are wouldn’t you…

Saturday at the Sandringham in Downend was a rather less vigorous affair; possibly at least partly because they’d apparently forgotten we were coming. Nonetheless, we had an entertaining night, a few chums turned up, and a 21st birthday coterie kept the dancey side of things going rather well. You could tell they were too nice, though – when a glass dropped and smashed on the floor, they all stopped immediately to help pick up the pieces and mop up the mess before continuing. Most places we play, when that happens there’s a brief cheer, and everybody just carries on dancing in the beery shrapnel regardless.

Sunday afternoon, and Weston Ex-Services club turns out to be an absolute delight – there’s enough space for a bit of prancing around, and the crowd are lovely, and very appreciative – particularly in the drinks-buying department (which, incidentally, is always very well-received amongst the muso fraternity – so if you ever see band you rather enjoy, please offer to buy them a beer. Particularly if they’re us).

Coming up next week – busy again, and it looks like it’s going to be a bit of a roller coaster ride of excitement…

Friday 6th – Back Bar, Weston Super Mare
Love playing here, haven’t been for a while, but there’s a proper stage with a drum riser, a rather potent house PA (so we don’t have to worry about setting ours up), and generally it’s a great fun gig. Oh, and everybody there is usually pissed. One time we played here, in mid-September, there was a whole group dressed as pirates, having mock cutlass fights at the front of the stage. We asked them if they knew that they’d got the date wrong, and that Talk Like A Pirate Day had in fact been the previous weekend.

“We know”, they shouted back. “We haven’t been home yet.”

Saturday 7th – Golden Fleece, Bath
Lovely little bikery pub, we might have to wheel out a healthy dose of the rocky stuff here. Oh dearie me, how will we cope…?  

Sunday 8th – Bulldog, Filton – 4pm start
They seem to like us in here, despite the fact that what we play seems rather at odds with their juke box selections – which seem to consist of a 50/50 mix of Johnny Cash and Benny Hill. Oh well, as long as they’re happy. And I haven’t listened to “Ernie” for ages…

Right, thas’ your lot for now