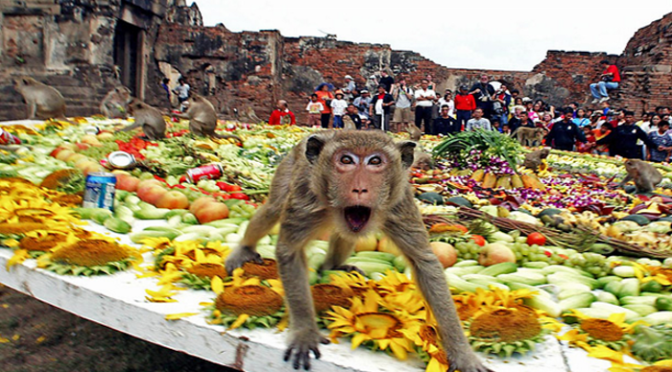 A mighty fine weekend’s rollicking on the Good Ship Angel Up Front, a three-gig voyage, and a fine haul of rawk’n’roll plunder.

Friday at the Blue Lagoon showed a good turnout of old chums, which was rather lovely – a wonderful surprise for me to see long-lost almost-daughter Sophie there; meanwhile, not-so-long-lost-actual-daughter Lily was drinking elsewhere in Bristol, and missed the reunion; only after being driven past the venue on her way home, and thinking, “That looks like my dad’s van”, did she check to see where we were gigging. I may have to demote her.

There were, of course, a whole bunch of other people there too, including the inevitable bunch of noisy energetic lads, who provided some early entertainment (the noisiest was actually awarded one of Emma’s coveted “M*th*rf*ck*r” stickers for his efforts), but as the evening went on they became a bit spilly and droppy-pinty, so at the end of the first set there was a full ten-minute operation to clear up the broken glass. We didn’t see them after that, but it’s a fair bet most of them went outside to be sick in the bins.

Saturday night dawned fair and clear (or something), and Emma and I arrived at the King Edward VII in Gloucester to be greeted by smiling local chums Adam, John, Anne & Emma, and a grumpy -looking Ben. The reason for the latter’s displeasure is apparent when we go inside and are shown where to set up – a tiny little alcove, scarcely wide enough for a drum kit, but nothing else. After a bit of negotiation with the staff, we are allowed to expand out a little, and eventually manage to shoehorn ourselves in. In fact, I end up with quite a nice sound – but then, I’m standing right in front of my amp, so while standing there I’m able to drown out the other noisy buggers.

At least, that is, until the batteries in my wireless die, two songs into the second set. It’s a bit annoying, since they were fully charged when I put them in two songs previously… I hastily swap back to the previous ones, which keep me going right until half way through the final encore, Paradise City, before giving up, leaving by guitar suddenly totally silent. I leave the rest of the band to keep a singalong going round the final chorus while I scrummage around the back of the drum kit trying to find my emergency backup spare spare batteries, frenziedly slot them in without dropping anything, and rush back out front just in time to fire into the Big Outro Solo, complete with rubber duck. (Well, if Jimmy Page can play a solo with a violin bow, I can play one with a duck, is my view).

So, a jolly fine night in the end, and we collapse in a cheery heap and wait for the kit to reload itself into the van. It doesn’t, so we have to do it ourselves. I’m beginning to think that that Musical Equipment Self-Loading Magical Powder that I bought off ebay was a waste of £12.99…

Sunday afternoon, and we’re playing at one of our favourite regular venues, the Queen Vic in Stroud. It’s the 20th anniversary of owners Rob and Pam running the place, and they asked us to come and play. That’s really sweet (we were careful not to ask how many other bands they asked first, though…), so we took them along a cake.

Because then we get to eat cake.

We arrive to find John and Anne waiting for us again – two nights in a row! What’s going on here, I wonder, before remembering that I owe John a drink… We also find a large table groaning with food…At last, someone has got our rider right! 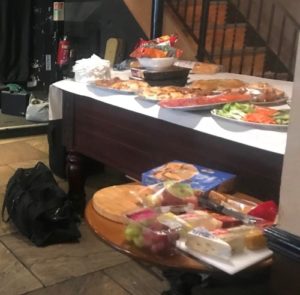 …Oh…no, apparently, it’s supposed to be for everybody.

We set up, we play, we have great fun. There’s a cheery amount of good natured dancing around, although at least one of the “local wobblies” (credit to Anne for that phraseology) appears to have overindulged to such an extent that he actually dozes off during Sweet Home Alabama. Happily, we are all equipped with wireless systems, so we are able to go over and check he is still actually breathing… 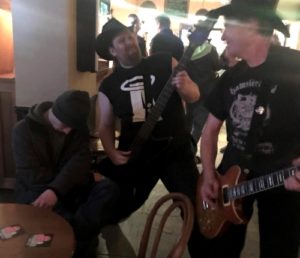 A little later, he wakes up, and comes up between songs to ask us, bafflingly, if we know any “ordinary music…you know, like they have on Top Of The Pops…”

Emma smiles sweetly at him, and reassures him that he’ll like the next song, which turns out to be by renowned teen pop idols Queens Of The Stone Age…

At the end of the night, Emma, Ben and I make use of our wireless freedom to go down the far end of the bar and harass landlord Rob, who is rocking out to AC/DC with an inflatable guitar, blissfully unaware of our presence behind him… once he clocks us, he promptly dashes up to the stage, grabs the sticks from Stuart and takes over the drumming to finish the song with us. Sheer genius!

All in all, a mighty fine way to spend a Sunday, we reckon.

Coming up next weekend – oh, actually it’s a weekend off.

Seeing that the main reason for me writing these is to promote our upcoming gigs, it looks like I’ve just wasted half an hour typing…ah well!