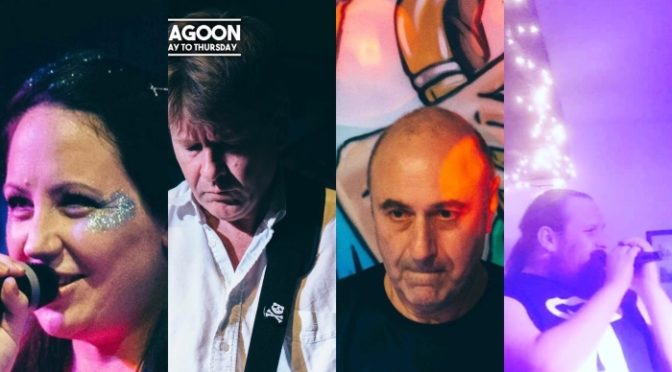 Well, hello there, my little sarsaparillas…

A weekend with no gigs to report on, so you’ll probably be quite pleased to hear that this will be a rather short little missive.

It’s probably just as well that we didn’t have any booked, though, as we would probably have had to cancel them anyway – our poor Emma has been Proper Poorly. She’s been stuck at home feeling sorry for herself for several days, with barely enough strength left to update our social media…

In a spirit of “Well, if I can’t sing this week, maybe I should at least update the band’s profile page on Facebook”, she painstakingly cropped some photos of each of the four of us, and assembled them together into a suitably rawk’n’roll collage, which she duly published on aforementioned social media site.

Indeed, if you are so minded, you can go and take a look. What you won’t see, however, is her first effort.

The picture of me was taken from a PR photo at our recent gig at the Blue Lagoon in Bristol, and had their logo neatly printed at the top.

By the time Emma had cropped the photo to fit, it unwittingly showed the handsome visage of yours truly, beneath the legend “A GOON”.

Brilliant. I was quite disappointed when, after I pointed out this feature, she amended it. But not immediately, as she first spent about twenty minutes sobbing with laughter, and – I like to think – making more wounded chaffinch noises.

With a bit of luck, we’ll be back to full fighting strength this weekend, as we have one of our favourite venues to play…

Friday 20th – Railway Tavern, Fishponds
Ahh, after a long break, back in the Court of Her Majesty Queen Amy of Fishponds – always great fun here, there’s usually a lovely bunch of folks in, and of course our delightful hosts Amy and Mark. Can’t wait. I may even bring my lovely other half along, it’s been a while since she was allowed out.

You have been warned.