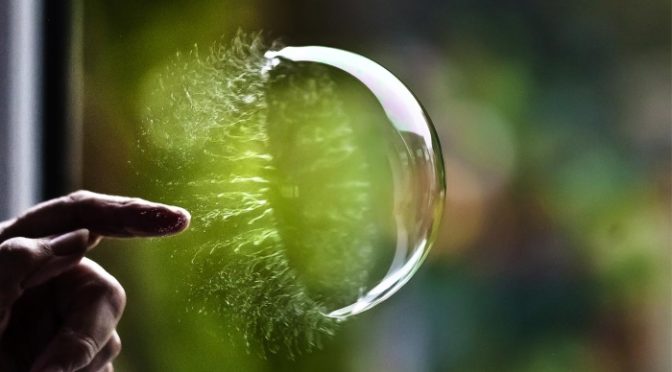 Well, that constitutes a “good week”, I think – at least in that nobody broke any bones this time.

Actually, Friday night at the Trout in Keysnham was great fun, despite a couple of rather spectacular cockups from yours truly – including the classic “starting the next song without looking at your fretboard, then after half a verse slowly realising that you started in the wrong key” mistake. Nonetheless, the rather lively crowd didn’t care, and to be honest we were having so much fun we didn’t either.

It happens that a couple of doors up from the Trout is a rather upmarket ladies’ intimate garment emporium – and a very fine establishment I am sure it is. However, Ben and I have for a long time principally been admirers of the sign outside, modeled here by Emma; where, as you’ll see, the unfortunate calligraphy choice makes it all too easy to mistake that “F” for a “T”.* 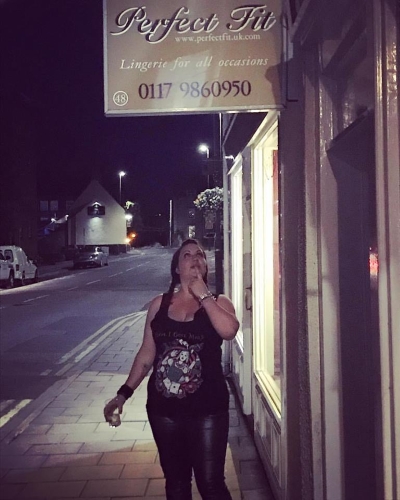 That’s right. It looks like it says “Perfect Fit”!

I must confess I had some trepidation’s regarding the following night’s gig; an hour-long slot at Dursley Carnival, in between (we were given to understand) a local band and an Olly Murs tribute act.

We are not that amused to find that the running order has been shuffled, and we now have to wait almost two hours before we can go on, sitting through another local band, followed by an Olly Murs tribute.

However, the stage crew there are fantastic, and make up for everything by being friendly, cheerful, helpful, and running off to fetch us all some beers while we wait.

When it comes to our turn the first thing we notice when we ascend the stage is that it’s very wobbly – once assembled, the top of my amp stack is waving about in a precarious and potentially astronomically expensive manner every time somebody moves. I shuffle it about to try and find a stable bit of stage as best I can, while Emma and Ben carefully position themselves to try and avoid the whole shebang collapsing.

No time for a soundcheck, so off we go – and so it is at this point that I discover my wireless is cutting out intermittently. Fan-fucking-tastic.

By standing extremely still – which I need to do anyway to avoid my rig performing a back-flip off the stage – I can just about keep my guitar sound working, at least most of the time; I am concentrating so hard on staying still that I really don’t know what else happened during the set, other than a lovely moment when the whole carnival crew performed a synchronised dance routine for us, and a number of horrible moments when my wireless cut out a crucial instant, only to cut back in again while my fingers were in the wrong place as I was busy thumping the bastard thing with my free hand.

We played the last number, and hurriedly strip the kit down to clear the stage, during which process one of my power supply units simply explodes into pieces as I unplug it. A fitting end to the set…

Just as everything is safely packed away in the van, the next act starts. It’s a Bruno Mars tribute act, this time. It is, in actual fact, the same bloke as before, but in a different hat.

Once again the lovely stage crew come to the rescue, fetching us more free beer and producing some food for us as well. Once this is consumed, Emma points out that she has been sober long enough, and so we pile off back to my place to empty some whiskey bottles; leaving the Bruno Murs / Mars person to amuse the few locals still upright…

Funnily enough, although I spent quite a lot of time the following day trying to figure out what was wrong with my wireless, it never missed a beat; I simply cannot get it to misbehave now.

I am sure it’s waiting for Friday to do that…

Friday 21st – Cat & Wheel, Bristol
Small cramped space for us, but promises to be a very lively night. I’ll be the one in the corner with the huge pile of spare guitar cables and the worried expression.

Saturday 22nd – Crown Inn, Lechlade
I don’t think we’ve ever been to Lechlade before. I just Googled “Things to do in Lechlade” – and top of the list came “The Dancing Trousers Cookery School”. Absolutely true, try it yourself if you don’t believe me. So – this should be a nice little adventure for us…