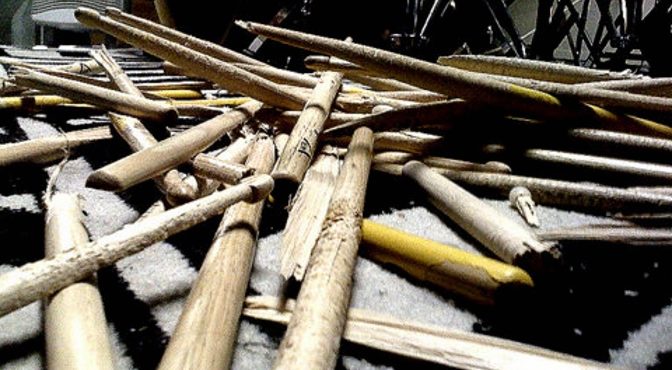 Another jolly weekend in rock; Friday at the Cat & Wheel was notable for the sheer quantity of spilt beer and broken glass all over the floor afterwards; a very lively night, but fortunately nobody aimed their boobies at Stuart this time. After we passed out the “fellatable guitars” into the crowd, only one came back safely afterwards, but was so covered in beer and grime that I binned it; after all, nobody’s going to want to wrap their lips around that, I figured.

Saturday night, and the rather more refined surroundings of Queen Amy’s Railway Tavern in Fishponds.

As we are setting up, a nice lady comes up and asks Stuart to warn her before he starts hitting the drums, as the small dog she has with her is very nervous and panics at sudden loud noises. Stuart asks if the dog would be okay with a little gentle tuning-up of the drums, and she says this will be fine.

Accordingly, he sets up and gives his snare a gentle tap or two. Immediately she appears at his kit, very irate, clutching a small trembling canine, and gives poor Stuart a Proper Telling Off, before stomping back to her table.

“Don’t worry”, I tell our bemused sticksman, “I’ll sort this out”.

I go to apologise to the nice lady, and after listening to her for a while rhetorically asking why drummers are always incapable of not banging things, not even for a few moments, and, especially since they’re about to be hitting drums for the next two hours anyway, why they can’t refrain for just a little while so that innocent members of the public can remove their fractious pets from the area, I realise that this scenario has been played out several times before, and that probably she doesn’t realise that tuning a drum kit cannot be done without actually touching it.

To try and mollify her, I explain that it is a common characteristic of drummers to be fairly straightforward, innocent souls, who are easily confused.

“You know those little toys you used to get, the little clockwork monkeys that bang a drum?” I say. “Well, there’s a reason they’re monkeys…”.

This line of reasoning seems to appeal to her, and by the end of our little chat she is much happier.

I go back to setting up, and Stuart looks up as I return.

As the night progresses, quite a few heavy imbibers are in evidence, including a hen night party, sipping their drinks through hilariously willy-shaped straws.

“Is that what I think it is?” Rosa nervously asked one of the girls.

“Oh, it certainly is – would you like one?” came the reply.

“Yes, please”, replies Rosa, adding after sipping her drink, “Ooh, it tastes of strawberries, doesn’t it?”.

“They always do”, I inform her.

Ben eyes me suspiciously. “And how do you know?”

I do not deign to answer, choosing instead to maintain a dignified and enigmatic silence.

Highlight of the evening for me occurs halfway through an impassioned guitar solo, when I open my eyes and am delightfully startled to find Queen Amy’s lovely face has appeared half an inch from mine, puckered up for a friendly greeting kiss. Aww, bless! We’d been wondering where she’d gotten to.

Just to balance things out, during my next guitar solo a few minutes later, I am hit in the side of the head by half of a flying drumstick [Editor’s note: Karma eh!].

The evening continues with much more jolliness and dancing around, and finally, several songs after time has been called, we run out of things to play, and call it a night.

So, a lovely night, and now we have just one more gig to play with Rosa before she runs away with the Jazz Pixies…

Friday 27th – New Crown Inn, Bath
Lovely friendly little pub, usually gets pretty full, but that’s largely on account of it not being very big. On the other hand, I’ve just remembered that last time we played here was Halloween, so it’s entirely possible that our fancy dress antics last time will have scared off all the customers. And perhaps even that the landlord has run away to hide, and maybe set fire to the pub on his way out, just to be on the safe side. We shall have to see…