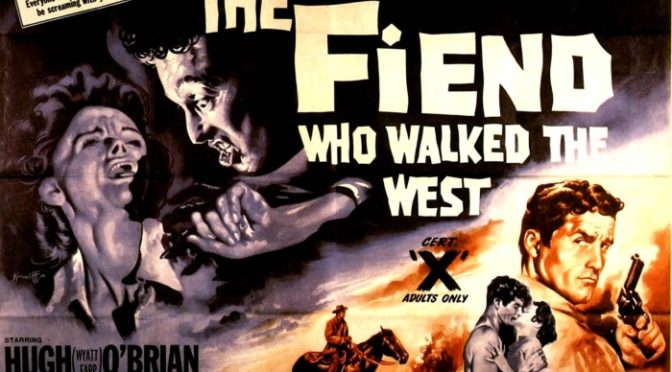 Having played over in Wales this weekend, I’ve randomly decided that a Western theme might be appropriate for this week’s little oeuvre. Tether up your horse, grab yourself a bottle of moonshine, and settle down by the camp fire, nice and comfortable like, and I’ll begin.

It was a moonlit night in old Mexico; I walked alone between some old adobe haciendas.

Suddenly, I heard the plaintive cry of a young Mexican girl.

The name’s Tex; oftentimes folks just call me The Man In Black. I been ridin’ out here on the range since I was knee-high to a Smith & Wesson, jus’ makin’ my way as best I can. You’ll know me when you see me – black leather hat, black shirt, black leather jeans, and black leather boots.

I used to dress all in brown paper, but had to change my outfit after I got thrown in jail for rustling.

Guess my way of life might seem a little wild to some of you swanky city folks, but I get by; six-gun in one hand, bottle of red-eye in my saddlebag, and Travel Scrabble in my pocket, for those long cold nights around the camp fire.

Lately I’ve been hanging out with a few like-minded vagabonds; my buddies and me have been drifting round some of these little Texas towns together, tryin’ to make a few dollars without catching the eye of the local sheriffs, if y’all catch my drift.

One of my pardners is Dead-Eye Ben – so-called because if you look into his eyes, he’s cold and dead inside. But to do that, you’ll probably need to stand on a whisky barrel – he’s a real big fella. Hard as nails, and a handy man to have around in a bar fight; he once dropped a charging steer with one punch. And then ate it, without even a glass of Beaujolais to wash it down.

Then we got Doc Stooie – an old-school sharpshooter, he used to be real wild and reckless in his younger days, but these days he’s calmed down some, and is more into the painting and decorating trade.

He once glossed a man in Reno, just to watch him dry.

And finally we got Miss Rosa, a real sweet gal who’s turned many a cowboy’s head – sometimes all the way round – until they agree to apologise, and then she lets them go.

So, it’s just the four of us, ridin’ out on the prairie together, making a few bucks as best we can.

One particular moonlit night, we rode through Caldicot City, we came across a little backstreet joint called the Cellar Bar Saloon, and figured we’d try our luck in there. As soon as Dead-Eye Ben walked in, the place fell silent – apart from the sound of crumbling plasterwork.

“Dammit, Dead-Eye”, yelled Doc, “Can’t you remember to use the door?”

“Sorry, boss”, mumbled the hulking cowboy, brushing the plaster dust from his hat.

The barkeeper looked up from the glass he’d been studiously polishing, and his scowl turned to toothless grin when he saw Miss Rosa.

“Four shots of red-eye and a packet of Jelly Tots”, she responded, fixing him with a steely gaze.

“And we’ll have the same”, added Doc.

Ben leaned menacingly over the bar. “And I’ll have a Curly Wurly, on the side”.

“S – s – sure thing, folks” replied the barkeep nervously. “We don’t want any kinda trouble in here, this is a nice respectable place”.

We leant against the bar, sipping our drinks, and surveyed the scene.

The piano player had quietly slipped away whilst we were ordering.

“Looks like you’re a little lacking in the pianist department”, observed Doc.

“That’s what my wife says”, replied the barkeep ruefully.

“So”, suggested Doc, “How’s about me and my buddies play a few tunes for these good folks here, in return for these drinks?”

“You may as well agree”, Rosa informed the barkeep, “We don’t have the money to pay for the drinks anyway”.

“Aww, shucks, well, I guess so, then”, replied the barkeep. “What kind of music do you folks play?”

In two shakes of a mustang’s tail, Miss Rosa had taken out her fiddle, I retrieved my trusty six-string from my saddlebag, and we soon had the bar a rockin’ and a stompin’ as we played the night away, suppin’ on cheap whiskey and knockin’ back Jelly Tots like there was no tomorrow.

As we were playing merrily away, and the bar was full of folks dancing and singing along, suddenly the door burst open – and there loomed a large burly figure in a black hat, filling the doorway with its ominous presence.

Silence fell; you could have heard a pin drop.

“Ben, you clumsy ass, pick up that pin”, hissed Doc.

The mysterious stranger strode into the room; I was surprised to see it was in fact a large Alsatian dog, wearing a full-length black leather coat; from the end of one sleeve protruded a grubby bandaged stump.

“I’m lookin’ for the man who shot my paw”, drawled the stranger menacingly.

“Well, there ain’t nobody in here lookin’ fer trouble”, said the barkeep nervously, “Why don’t you come on in, nice and peaceful like, and have a drink. On the house”.

The mysterious stranger settled himself at the bar, and we went back to playing.

By the end of the night, Dead-Eye had gotten through three bottles of red-eye, Miss Rosa had finished off seven packets of Jelly Tots, and the crowd had danced itself into exhaustion. I figured it was time to quit playin’, and headed up to the bar next to the mysterious stranger.

“Mighty fine playin’” he observed. “Where you folks headin’ off to next?”

“Well”, I told him, “Next Friday – the 18th, that is – we was plannin’ to visit the King William IV Saloon, way up in the hills in Coombe Down”.

“You mean that one just up outside Bath City?”, he enquired, just to make clear where our next gig was for the more geographically-challenged reader. “The one with the postcode BA2 5HY?”

“Yup”, I replied, anxious to reinforce my cowboy credentials.

“Nice place”, he said, “Reckon I might come up and join you if ain’t found any work before then”.

“But – you’re dog who can talk”, I pointed out. “That’s pretty unusual. Surely you could go and join a circus, or something?”

He looked at me, kinda puzzled.

“A circus? But what would a circus want with a plumber?”

Normal service will be resumed as soon as possible.