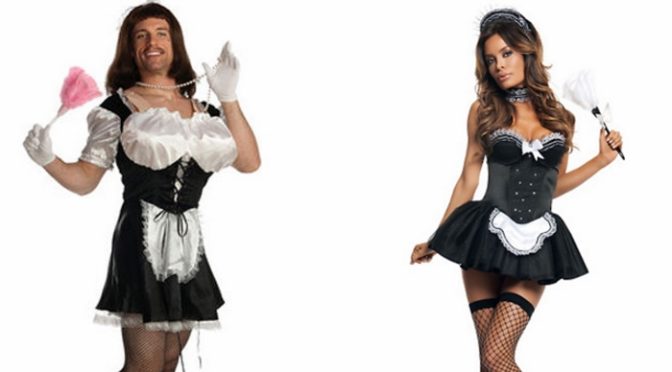 Well, how do you do,

If that makes no sense to you, folks, Google it for context…

Friday night, and the New Crown Inn in Bath. Earlier in the week, the landlord had called to let us know they were making it a Halloween fancy dress night, if we fancied joining in.

Do bears poo in the woods?

So, an email was duly sent around all band members, explaining the dress code, with a stern reminder that, as per school PE lessons, anybody who forgets their kit has to play in their pants. I cunningly covered both options by plumbing for a Rocky Horror outfit.

An excuse to dress up silly also caught the attention of lovely daughter Lil, so thus it was that she gently blackmailed Ben into driving so she, her boyfriend George and my beloved Dem could come along too, suitably costumed up – two French maids, one Dead Riding Hood, and Dr Seuss’s Thing 2. A fairly mixed bag, I think you’ll agree. Particularly since George was one of the French maids; he seemed rather comfortable with his new attire, and was slightly reluctant to part with at the end of the night. We arrived to find Stuart literally drenched in fake blood, with his kit looking resplendent with cobwebs, hanging skeletons, and the like, and Rosa sporting a rather fine horns-and-demon-wings combo.

It was also a chance for me to try out my extremely shiny new amp, which seemed to acquit itself rather well for a first outing. I suspect once I get the hang of it, it’s going to be even more grin-worthy.

The gig itself was jolly fun, the pub is fairly small and so it was easily packed, and although the dressing-up contingent was only about half of them, it did make it easy to spot who the fun punters were going to be.

Towards the end of the night, we were joined by a hen house party from across the road, all dressed in nighties and slippers, who’d heard the noise and came to investigate. They arrived just as Rosa was trying to persuade Ben to take lead vocals on a song, and the impromptu crowd chant “Ben For The Hen”, seemed to do the trick.

So it was that I ended the night playing shred solos in fishnet stockings, sharing the stage with some lovely ladies in nighties wielding inflatable guitars.

And I actually get paid for this kind of thing.

My favourite moment of the night was afterwards though, when a nice lady came shyly up to me and whispered quietly, “Do you know… I’ve got that exact same Basque as you…”
I’m not sure, but I think on some level that makes us sisters…

Anyroadup, coming up this week…

Friday Nov 4th – Old Neighbourhood, Chalford
Up in the hills near Stroud, a lovely little pub where they all go a bit bonkers. Absolutely right up our street, then. As long as we can find it in the dark. Otherwise, we’ll be up another street instead.

Saturday Nov 5th – The Locomotive, Swindon
Ooh, now this one is usually very lively – one of Swindon’s premier gay bars apparently (I don’t happen to know if there are any others), and last time we were there we were heavily outnumbered by inflatable willies. I think, on balance, I probably won’t be dressing up for this one…

And that, my friends, is your lot for this week.

[Editor’s note: IT wasn’t easy to find a decent image of French maids that wasn’t verging on or actually pornographic so I settled for this one and on the basis of each to their own!]