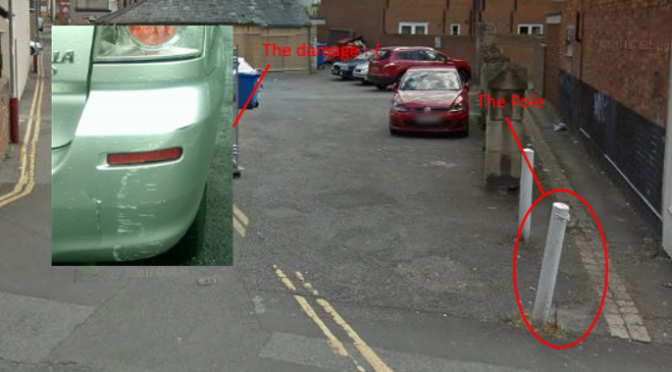 It was nice to be back at the Rolly in Swindon again, and I was very pleased to see that the locals are still every bit as daft as they ever were. Not, however, quite as daft as us…

Poor Stuart has been far too busy lately, and is beginning to show signs of strain; this is not helped by a string of vehicular difficulties; the last two practices have been held up by his ropey works van breaking down (the second time, rather inconveniently in the middle of the M32), and on Friday evening as Ben and I are hurtling down the M4 Swindonwards, we get a call from him saying he’s stuck in traffic and running late. Thus, we roll up at the pub and unload everything, park up, and leisurely set up all the amps, lights, PA, etc before he arrives. Once he finally does, we empty all his kit onto the stage, and he goes off to park. It’s fifteen minutes before he returns. Did he get lost?

“I reversed into a pole”, he explains.

Was he badly hurt? we enquire.

“But was the Pole badly hurt?” we ask.

“Just a dent in the back and a split bumper”, he clarifies.

He just looks puzzled, and returns to his arcane drumkit-assembling activities..

Anyroadup, once we are all present and correct, it’s time to play. We’re pleased to see our drummer pal Sarina in the house, apparently her band has no gigs lined up for the next few weeks, so as a result she’s feeling a bit lost. Would she like to sit in with us for a couple of numbers?

Why, yes, she would.

What she doesn’t know is that for this number, we have taken to occasionally whipping out the comedy false beards.

Resistance is futile; so somewhere (alas, not attached here) is a fine photo of an attractive young blonde rock chick drummer playing away behind the kit, wearing a huge false beard and a somewhat put-upon expression.

I do sometimes wonder why folks who know us come anywhere near us, it’s obviously asking for trouble…

And, for those of you interested in asking for trouble this week…

Saturday 1st Oct – Wroughton Workmen’s Club
Not been here before, but I can only surmise that this is where all the workmen are hiding whenever you drive down the M4 past miles and miles of traffic cones, and not a hint of anybody actually doing any repairs to the road. If so, rest assured I shall be having a stern word with them.

So – that means I’ve actually got a Friday night off. Maybe I should actually go out and see a band, or something. Haven’t done that in ages. Sometimes, I find the bit I enjoy most is after they have finished playing, and have to pack up loads of heavy kit, and manhandle it out to their van; while I can sit down comfortably and watch whilst sipping beer. Does that make me a bad person…?