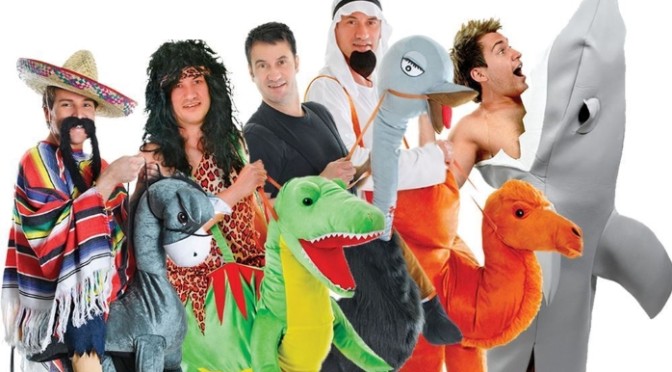 Early on, Rosa had to bully the crowd quite a lot before they started enjoying themselves, but eventually they started to get the hang of it, and there was much a-dancing around and a-falling over before the night was out. Towards the end of the evening, the doors burst open and a horde in fancy dress trooped in, including a shark, Nemo, two flamingos, a strawberry, a Mexican, somebody on a dwarf’s shoulders, and, my personal favourite, an Arab riding a camel.

The horde quickly took over the dance floor, and it was soon (inevitably) awash in fizzy lager – as were most of them, and we kept playing on until we ran out of time – a mere two songs before Stuart ran out of energy and hand/eye co-ordination.

The management seem mighty pleased with the evening, and it seems they want us to come back very soon. Luvverly!

Saturday, and it’s down to distant Devizes for a night at the Black Horse, which turns out to be a nice little pub right by the canal. Ben and I make a point of staying away from the water, just in case the other one pushes us in. The place isn’t over-busy, but they give us beer and everybody there has a lovely time. I was particularly impressed with the synchronised barmaid dance routines – have they been practicing?

In the course of one of our usual idiot rambling conversations, Stuart idly muses as to whether he should take up a hobby smearing his cobblers with a variety of different substances.

Ben and I warm to the idea – we could make it a feature at gigs; Rosa could ask the crowd to guess what he has been smearing himself with this week…

“What’s that, sir? Marmalade? Good guess, but no, that was two weeks ago”.

“Treacle? No, but that’s a good idea. Maybe he’ll try that next”.

At this point, Rosa scurries off and sits by herself pointedly at the other end of the pub giving us baleful glares.

Oh dear; we think we may have actually broken her this time…

Right then, coming up this weekend, just the one outing on Friday (as I’m having in inning on Saturday for young Lil’s birthday)…

Fri 15th – Blue Lagoon, Horfield
Er – it’s a bit like the Cider Press, just up the road, actually. They’ll have to go some to top last Friday’s entertainment, though – camels up, and Barbie down!

Right, that’s it for now