Well another weekend, and I’m still not dead. Came pretty close, though…

After starting to feel fairly rough at the end of last week, I awoke on Saturday morning to find that during the night, somebody had removed both my lungs, and replaced them with a pair of black bin bags, which had been filled with raw sewage and cement dust and left out in the rain for a week. Not content with this, they had also set fire to my throat lining, put it out with a cricket bat, and tried to hide any evidence by removing the surface layers with a cheese grater. In addition, each of my eyeballs had been temporarily removed with a chisel and, after being used for a vigorous game of ping-pong, were soaked in vinegar before replacing them back in their sockets, using a hammer.

Presumably this was to stop me seeing whilst they pulled apart every joint in my skeleton, and hammered thousands of tiny little pins into the end of each bone, before dipping it into nitric acid, and then into a bowl of rock salt, before reassembling into an approximation of its former shape. Despite the fact the heating is on so high that even Dem is declaring that it’s “a bit warm”, and I am wrapped in a duvet, a blanket, and whatever other thick garments were within reach, I am uncontrollably shaking like a leaf in a hurricane, shaking like a jelly with Parkinson’s perched on a spin dryer, shaking all over more than Johnny Kidd and the Pirates; but not to worry, ten minutes later I am slumped on the floor, soaked in sweat, trying to crawl towards the outside world to get some fresh air before I spontaneously combust.

Oh dearie me, I don’t feel very well at all. Even my hair is aching, and I’m pretty sure that’s not medically possible.

After consuming at least some of every single medicinal product I could find in the house, and trying unsuccessfully to locate some kind of food that doesn’t contain broken glass, after several hours of misery I am in a state which I know Stuart would consider “fit to play a gig” (i.e. not actually dead).

So I slump out of the doorway into the van, quite glad that it is a very windy night; it means my erratic driving just looks like the van is being blown all over the place, rather than the actuality – which is that I am having some difficulty deciding which of the three roads I can see whirling about in front of the windscreen to drive along.

I arrive at the Portcullis in Fishponds, and as Stuart and Rosa are already there, and Ben turns up just after me, I can get away with surreptitiously just carrying in the lighter stuff – as I am (possibly slightly irrationally) concerned that if I try to pick up a heavy amp, I may just fall through to the centre of the earth.

In deference to the horrible weather, Rosa has turned up to play the gig sporting a fetching pair of stripy wellies. Genius! She has also brought along a very fine-looking cake she made today for us to sample; alas, I have to turn this down, as I know for sure that my slice will contain broken glass…

I must admit I was a little bit disconnected for most of the night, but I think we played okay, and I think the punters enjoyed it; I do know that we somehow ended up with a giant stuffed Tigger joining us for the last few songs – I know this because I found this photo on my phone… 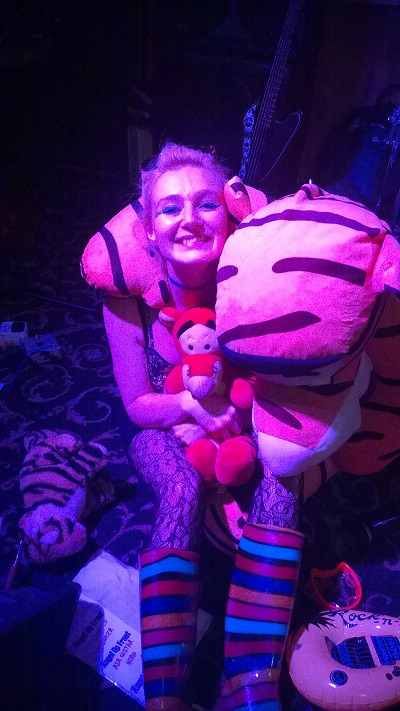 I also know that several lovely people offered to buy us drinks, and I know this because I had to turn them down – and that’s not the kind of thing that I forget.

So – assuming I survive the next few days – coming up this week, some rather lively rawk’n’roll action:-

Friday 20th – Lily B at the Clothiers Arms, Stroud
Back in the dear ol’ Clothears with talented daughter– but this time, because we’re bored with the backing tracks we often use, we’ll be playing the first set acoustic, and the second one with full-on electric rawk’n’roll action from her brothers, the mighty fine Polar Bear Cheese Pirates From Outer Space (or PBCPFOS, to give them their full title). Still without a proper guitarist, they’ll have to make do with me; it’ll be an interesting night if only because there is actually not enough room to fit a whole band in there, and – even if there were – even a normal, restrained, gentle drummer would probably be too loud. And we have Jimi. Still, we likes a laugh…

Saturday 21st – The Swan Inn, Thornbury
Haven’t played in Thornbury for ages, so very much looking forward to this one. Since it’s close to home for me, we’ll be bringing Lily and PBCPFOS along to play in between sets; given the amount of drinks I’m likely to have to buy them, I suspect I will make a loss on this gig…

Still, at least I think I might be beginning to feel a little better now – although if anybody would like to assist with the recovery process, you’re welcome to provide me with beer or cake; or, as an alternative, please sing along now –