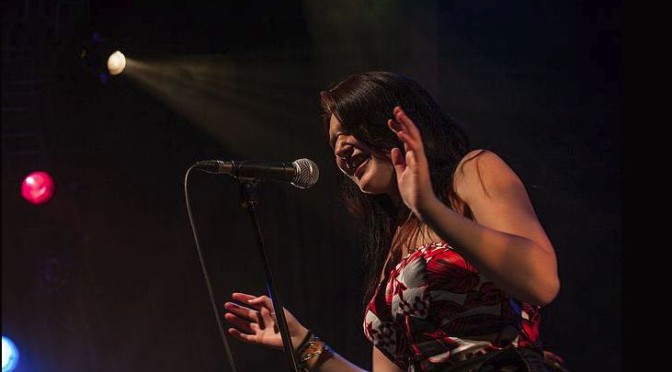 Well, it’s been a couple of weeks since we had anything to report from the technicolour world of rawk’n’roll, but actually now we have some rather exciting news…

Over the last few months, it’s become increasing apparent that our Lou has been struggling to keep up with all her many and varied musical commitments – as well as us, she’s also running an originals grunge band, and a covers duo, plus various other depping and teaching arrangements… and basically, a little while ago, she announced that she’d come to the conclusion that it was time to dump us troglodyte loonies so she could concentrate on her other projects.

And, to be honest, we can’t really blame her. She did kindly agree to put up with us for long enough that we could find somebody to take her place, and so we’ve recently been scouring the South West for a suitably angelic replacement.

It’s not been easy, but we have, I think, struck gold, and secured the services of the delightful Miss Rosa Gray, who – in addition to her really rather impressive musical skills – is an irrepressibly cheerful and energetic bundle of fun; not only has she made excellent progress with learning the songs, she has also survived encounters with my lunatic offspring, passing the notoriously challenging “Jimi Test” with flying colours. We think you’re going to like her.

And, already, Ben has managed to make her actually cry. (But only with laughter – we’re not usually that mean to singers until at least half way through the first gig).

Due to some unfortunate circumstances involving both Stuart and myself being in the wrong countries, we’ve not really given poor Rosa much rehearsal time to get ready for gigging; but we figured, what the hell…

Friday 11th Sept – The Tern Inn, Yate
Now, we’ve not played this one before, the landlord used to run the Portcullis in Fishponds, so he has at least some idea of what to expect from us. What he won’t be expecting, though, is young Rosa, since I didn’t have a chance to change the posters…

Don’t worry though folks, you’ve not seen the last of Lou – we’re doing what any self-respecting management consultant would call an “interactive phased transition handover period”, or as I call it, “Mucking about a bit”

Thus the following night we’re playing a wedding gig with Lou; the next weekend we’re playing with Rosa, and then we have one more lined up with Lou after that, before we finally set her free into the wild. We’ll keep y’all posted with details nearer the time.

Meanwhile, I thought I’d relate to you a little supernatural / psychedelic episode that occurred to me the other day…

Sunday morning, and a weary Alan blearily stumbles out of bed and shambles into the bathroom. Glancing into the bathroom mirror, I am astounded to see what appears to be the face of Jimi Hendrix looking back at me!

I screw my eyes up, shake my head, and peer carefully back into the mirror. Unmistakeably, it is Hendrix’s face staring coolly back at me, looking right into my eyes. I blink a couple of times more. I am definitely awake, and I am definitely not dreaming.

Can this be happening? Am I having some kind of supernatural encounter with the spirit of the greatest rock guitarist the world has ever known? Is this some kind of psychedelic message from beyond the grave? What can it mean? Why has it come to me? Is there some as-yet-uncompleted musical mission it is my destiny to fulfil on his behalf?

These thoughts whirl momentarily around my sleep-befuddled brain before another rather more mundane one occurs to me.

I adjust the mirror so that it is no longer reflecting my t-shirt back at me, and stump off downstairs in search of coffee.

Still, just for a moment there…

Incidentally, to those of you who are still sending me a stream of bakery-related rock song puns – you can stop now.