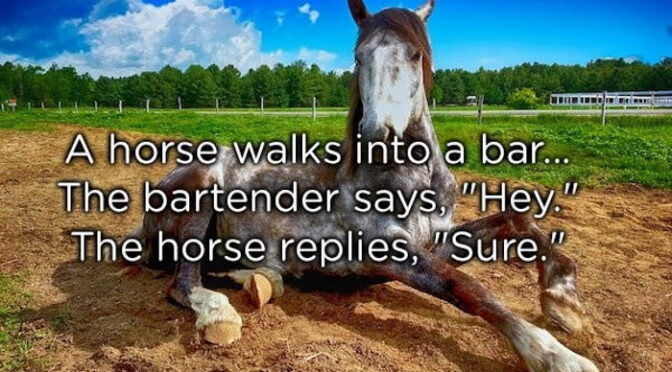 Just a brief one this week – firstly, a reminder of our two upcoming gigs this week, as previously advertised…

And secondly, based on a poll of the votes received last week, it would appear that you are collectively in favour of terrible, terrible, jokes.

So – here you go – and remember, you literally asked for this…

A horse sees a rock band perform and thinks “Hey, I could do that.” The horse calls up his local music store and is like “I wanna learn guitar, just one problem, I’m a horse.” The employee says “don’t worry we can do that.” The horse goes, learns guitar for a few months, gets really good, and is pretty happy with himself. “OK, now I can start a band!”

So, he calls up his friend, a cow and says “Hey, I’m pretty excited about this band I’m starting, do you wanna be my bass player? “Of course!” the cow replies. So, the cow calls up the music store and says “I wanna learn bass, just one problem, I’m a cow.” “We can do that” replies the employee. So the cow learns and starts playing with his buddy.

Soon, their friend the sheep gets jealous. He asks, “Hey, can I be in the band?” “Sure, we could use a drummer,” replies the horse. So, the sheep calls up the music store and says “I wanna learn the drums, just one problem, I’m a sheep.” “We can definitely do that!” says the employee. So the sheep learns drums and the three friends are officially a band. They work hard, and eventually, they write a few songs and make a demo.

A producer reaches out and says he can make them famous. So the band writes an album and goes on tour. At one stop on their tour, the horse gets a call about a family emergency. He explains this to his band-mates and they tell him to go home. He goes back and the emergency is not that serious. He decides to meet his band-mates at the next stop on tour. The sheep and cow take a plane while the horse takes a train. The plane crashes tragically into the side of a mountain. The horse hears this and is absolutely devastated. “I’ve lost my best friends, my band-mates, my whole life,” he cries. He decides to drink his life away and throw it all away.

So, the horse walks into a bar, and the bartender says, “Why the long face?”