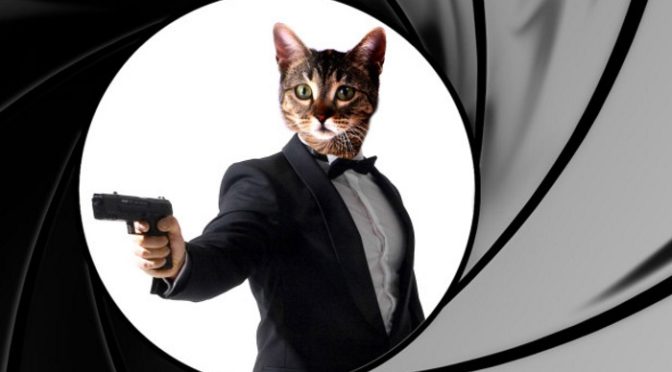 Not too much to report this week; after eventually finding our way to Saturday’s gig at the Albion House club in Cheltenham (it took Em and myself two satnavs and three laps of the one way system to actually find it), we rolled in to see Stuart and Ben already unloading.

Stuart, who used to live in the area, knows the road system, you see, and so was able to get straight there.

Unfortunately, as he discovered after the gig from the doorman, the one way system has recently been changed, and it seems that Stuart drove in on what are now heavily-camera’d bus lanes – meaning he can presumably expect a swingeing fine to arrive in the post over the next few days.

We have agreed that this will fall under the category of “business expenses”, and thus the bill will be paid out of band funds as supervised by our Chief Financial Officer, one Richard Thundercat (who is, of course, a cat).

The gig itself was pretty successful – Em and I achieved our goal for the night, which was to get the lady in her seventies in the rockabilly skirt up and dancing – not once, but three times – and the rest of the punters pronounced themselves well pleased with the night.

“You’re the best band we’ve had in here”, we are told by at least five different people, leading us to wonder how starved of musical entertainment Cheltenham actually is*.

As usual, I spend the entire drive home telling Emma how much I’m looking forward to a large whiskey or three once I get in – and as usual, by the time I actually get home, have a quick shower to wash off the worst of the glitter (occupational hazard for anybody sharing a stage with Emma), I actually end up retiring to bed with a mug of cocoa.

Which I only manage half of before falling asleep.

More shennanigans coming up this weekend, a bit more local this time: –

Saturday 20th – The Huntsman, Westerleigh Rd
It always feels like the wrong kind of pub to have bands in – but they keep asking us back, and it always somehow seems to work out all right, so we keep coming back. Oh,and they give us money, which is always handy for paying off percussionist’s motoring infractions.

Right, thas’ it for now

*They’re certainly starved of entertainment. When we packed up afterwards, we discovered that some bugger had waltzed off with one of our flashy light-up tambourines. So – should you be at some time wandering the streets of Cheltenham, and happen across a buffoon wielding aforementioned item, please do feel free to hit them across the back of the head with a shovel, and retrieve the item. In fact, if you do that, you can actually keep it. It’s yours. No problem.