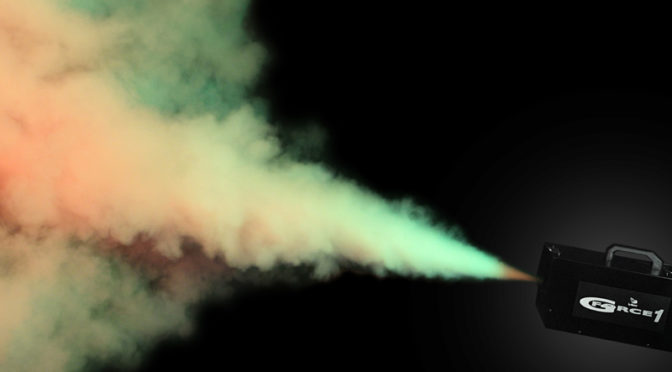 Well, that was definitely an interesting weekend…

Apologies to anybody who rocked up to Dursley Carnival on Friday expecting to see us; as you may have noticed, we weren’t there, unfortunately we had to bail out due to a temporary lack of bassist, with Ben being stuck in work and unable to escape. Sorry folks!

Still, we had a very entertaining night on Saturday, at the Albion Social Club up in Cheltenham. Once arrived, we were delighted to find a couple of friendly helpful staff who helped us load in all the kit, and then brought us some drinks. We like this very much.

We set up, and started playing to the half-dozen cheery punters who were sat with us in the room. Once we started playing, the room started filling up, and by the time we’d finished the first set, all was going swimmingly. It was partway through the second set that disaster struck…

For most of the past year, our little smoke machine Mr Smokey (a gift from our excellent chum Disco Dave) has been accompanying us to gigs, to add a little “stadium rock” frisson of excitement to proceedings, always with excellent results and never a problem. However, this time, I heard a strange warbling sound in the middle of a song; I was trying to figure out how we’d managed to fit a keyboard solo in, when it finally dawned on me that this was a fire alarm.

We decided to take a short break, open the door and let it clear; however, after ten minutes, despite the air in the room being as clear as a bell, the alarm was still going, and the staff put all the house lights on, and turfed everybody out of the building.

We all sat around for another twenty minutes as they attempted to reset the alarm, and eventually they managed it and we were all let back in to finish the night. It was a nice warm night, and nobody seemed to mind at all.

Rather to my surprise, once we were allowed back in and started again, the crowd just picked up where they left off, and once again the floor was filled with gyrating (and, in some cases, sinuously writhing) bodies. Lovely!

Having lost half an hour to Mr Smoky’s mischievous interruption, we played on straight through until midnight, when after a quick couple of encores, we finished – and immediately the lights came up, and the punters were rapidly shooed out of the building. I suspect we may have run past our allotted finishing time, whatever that may have been.

Shortly afterwards, the manager came up to us, looking somewhat stern, and we were expecting some kind of severe telling off… turned out he wanted to rebook us for some more gigs.

I did have another brief concern; after we finished, a chap came up to me and told me how he’d really enjoyed the evening.

“I have to say, though, if you don’t mind… You guitar solos…”

“Bollocks. That guitar sound really had bollocks. I mean, most bands, when the guy takes a solo, the guitar sounds goes really thin and weedy, but yours really had…erm…

So – we have no gigs coming up this weekend, but I can assure that the following one, we’ll be out in action again, ready for some more smoke and – er – bollocks…?