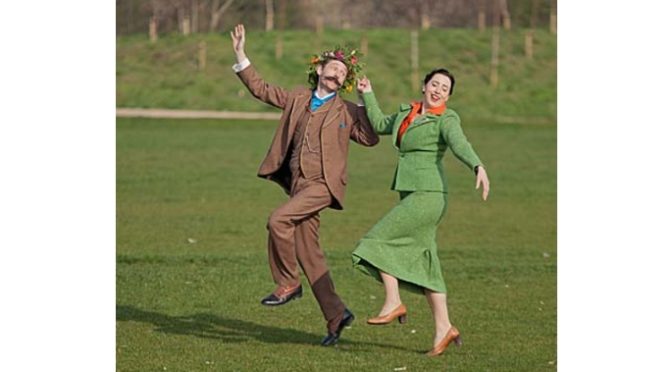 Well, it seems that our fears that the Giant Goram pub in Lawrence Weston had gone all upmarket on us were mercifully unfounded…

In fact, it was just as pleasant and friendly as last time we were there, with two additional bonuses of there being a lot more customers present (that’ll be Friday night instead of Sunday afternoon, I reckon), and the fact that they had cleared out a bit more space for us before we arrived. The latter was particularly welcome, meaning we were able to set up without stumbling over each other – although we did a bit, just for appearances’ sake – and we had enough room to prance about comfortably without too much danger of knocking anything expensive over.

There were folks up dancing around pretty much as soon as we started, which always bodes well, even if it just means they were already pretty drunk before we arrived.

In fact, we were so pleased with the friendly atmosphere that, on the spot, we wrote a song just for them; we called it “Sweet Home Giant Goram”. It’s a catchy little tune, if I say so myself, although it did sound somehow familiar – almost as though it was similar to an existing number – although we racked our brains, we just couldn’t place it…

After several “just one more” encores, we finally called it a day. “It’s a day”, we said; and set about chatting with the regulars and packing up. All in all a very satisfactory evening, particularly considering we hadn’t actually played for a fortnight or so.

And this weekend, we’ll be wheeling out the old magic not once, but two times…

Friday 23rd Queen’s Tap, Swindon
Nice lively place near the railway station. It’s been a while since we played here, but as I recall they operate that very fine thing, a “free drinks for musicians” policy. Why do we not play here more often…?

Saturday 24th – Blue Lagoon, Bristol
On a quiet night, this place counts as “lively” – and on a lively night, it falls into the “a bit mental” category. Unaccountably, we seem to fit in rather well. Great fun, and usually a few pals of various stripes turn up here to amuse us as well. Rather looking forward to it…

And that, my little sarsaparillas, is that, for this week.

I leave you with this lexographical Fun Fact: –

Did you know that Eskimos have over a hundred different words to describe how crap Snow Patrol are?