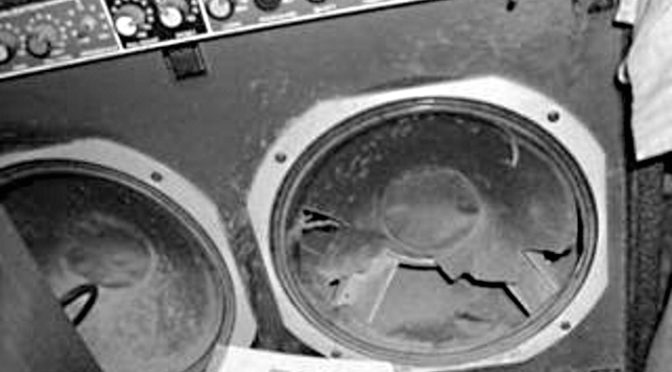 You ever get a week when nothing goes to plan?

We didn’t manage to fit a rehearsal in this week, due to a series of unplanned crises, but nonetheless I still managed to bugger up my nice shiny new amp; it’s suddenly started making a noise like a hornet’s nest, and since I’ve already replaced all the valves, this can mean only one thing – an expensive repair bill…

Still, while it’s out of action, we can still gig, because foresighted Alan has not one but two spare amps he can take along; thus equipped, we rolled up on Saturday to a rather nice venue in Dursley, where we are shown into a small bar area, which we immediately just know is going to be acoustically a bit messy.

Nonetheless, peerless professionals that we are, we set up, cheerfully bickering as usual about tripping over each other’s kit, and there’s time for a quick soundcheck… Oh, bugger. When I punch a chord, instead of the hoped-for “Kerrang!”, my backup amp makes a dreadful “waves crashing onto the rocks in a force nine gale” noise,…

It’s fortunate indeed that I have my backup backup amp with me, so after running out to the van to grab the appropriate cables and switchery for it, I plug in, only to find that this one makes a loud “dry leaves rustling in the wind” noise… Hang on, I seem to remember this happened once before with it, years ago at a bike rally gig, and as I recall, if I thump it really hard, just.. here…….Yes, that’s sorted it!

The stricken beast manages to just about last through the night, as does my wireless, which has taken to momentarily cutting out every few minutes; whereas Ben’s simply dies outright and he has to swap to a cable. Since mine hasn’t let me down at any crucial moments, I decide to soldier on with it and we just about get through to the end without any disasters.

As it happens, despite the gremlin difficulties, the gig goes rather well, and encores ensue. Actually I’m just relieved when we’re able to stop after a few encores, as I’m not sure exactly what piece of kit is going to pop its clogs next.

The following day saw me spending around six hours playing with both my errant amplifiers, dismantling and checking everything I could think of, and needlessly to say, they both performed flawlessly – leaving me totally unable to find or attempt to rectify any problems.

Although, helpfully, my wireless transmitter did assist my diagnosis of the previous night’s little mishaps, by simply dying outright and refusing to power up – instead, just blinking all its little LED indicators at me. A quick google and a check with the manufacturer’s website reveals that yes, these are symptoms of complete and irreversible failure; and no, of course it’s not repairable; and yes, of course it’s out of warranty.

Oh, well; coming up, two gigs this weekend; if anything else breaks we’re out of business, as I have pretty much run out of equipment…

Friday 26th – New Crown Inn, Bath
A nice friendly little pub, we do rather enjoy this one; and, as a special treat, if all goes to plan, we shall be bringing our nice shiny new Emma along to sing a bunch of the set with us. A cunning ruse, as it means that (a) Emma gets to run through a bunch numbers in front of an audience, and (b) Lil gets to spend the second set getting pissed. Of course, another way to look at this is that given our recent run of luck, we’re just making sure we’re equipped with a spare singer in case one goes wrong…

Saturday 27th – The Swan, Thornbury
Nice local gig for me (and Lily too, come to think of it…). I may therefore consider making several trips in the van and bringing along every single piece of musical equipment in my house, so that I can systematically work my way through destroying them one by one during the course of the evening, ending up with a paper-and-comb harmonica solo as an encore.

Or I might win the lottery, you never can tell.*

*Actually, I can tell – I won’t win the lottery.

Although the odds would be infinitesimally higher if I were to buy a ticket, I suppose.

Given my current good fortune, though, I expect that the shop that I walk in to buy the winning ticket from will be struck by a meteorite before I can get to the till…