Another day, another dollar… (enormous kudos, by the way, to anyone out there who can email me back the second line of my favourite Southern Rock Road Anthem)

The dollar in this case being provided by Molloy’s down in Bristol; we arrived to find a big heap of DJ kit and various bits of furniture all over the tiny little stage, so we hauled our kit part-way in while they were moving half of it out the way. Eventually we managed to get everything in and set up, and got on with the serious business of rawk’n’roll.

True to form, it wasn’t long before the dance floor was full of gyrating bodies, and all of a sudden it was half time already. Alas, no beer for your favourite musos, as we’d all managed to spend our pocket money beforehand, so a quick pint of water to cool off with, and it was back on with the show. Second half was (as usual) rather livelier thanks to the magic of alcohol – surprising, really, as from what I could see, most of it ended up on the floor. We had a couple of minor buffoon stage incursions, but on the whole they were tolerably well-behaved. During the second half, Rosa was handed a couple of notes from the crowd, who seemed to have found a pile of old betting slips.

This one rather made us chuckle… 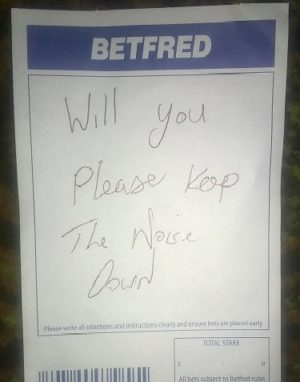 There was another note handed to Rosa which also made us chuckle, but in the interests of decency I shall refrain from publishing it here.
It appeared to show a crudely drawn representation of a gentleman’s wedding vegetables; although it was at once obvious that the donor was in urgent need of either some art lessons or a doctor. If you’re reading this – you know who you are – we urge you to please seek the appropriate professional help immediately.

Finally, we finished, we packed up, and – unable to manoeuvre the kit out through the bouncing drunken crowd – we sat and watched the dancing throng, noting with amusement the shabbily-dressed chaps vaguely bouncing about the dance floor in the forlorn inebriated hope that some kind of Brownian motion contact with a pretty lady might lead to them being taken away afterwards for the purposes of sexual intercourse. Unfortunately, the fact that some of the poor chaps looked like serial killers on day release did nothing to improve their chances.

Meanwhile, back in the future…

Friday 2nd Dec – The Trout, Keynsham
Loonies on a beer-sodden floor. And I still owe the landlord a terrible revenge after the “duck racing” episode…

Saturday 3rd – The Lamb, Marlborough
Great fun in here, too, a totally impractical tiny space to set a band up in, and yet somehow it works beautifully. Who’da thought?

And, that, my friends, is about that. Well-wishers will doubtless be pleased to know that I seem to have gotten rid of last week’s horrible head cold, largely by the cunning device of passing it on to my beloved Dem. Fortunately, I have been able to advise her that her need for sympathy is the same as mine apparently was last week.

Which is at least in part the reason I am typing this from a cold and damp shed.