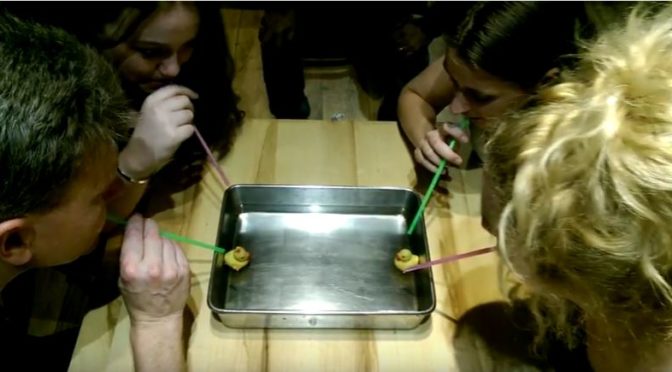 Another fun night out in Keynsham; up at the Trout, where there was the usual messy beer-spilling mayhem from the locals. My favourite moment of the evening occurred when Rosa decides she needs the whole pub to join with a dance move – and asks for suggestions from the audience. When none are forthcoming, as usual she picks on someone.

Theresa is too shy, and vigorously shakes her head, and waves her arms in front of her in a “no, no, no” fashion.

Rosa instantly copies her. “Come everybody, let’s all do the Theresa!”

And so they do.

It was much less disturbing than the other dance move I noticed later in the night. Really, I think that twerking should by law be reserved for the under-60s.

I suggest to Ben that for future gigs, we should make up a small, sober “No Twerking” sign to hang on the speakers.

He looks puzzled. “Remember, I’m from Yorkshire”, he points out. “Where I come from, ‘T’werk’ means ‘place of employment’”.

After we’re done and packed up, the landlord insists we play a game of “Duck Racing” with him. It’s a fairly straightforward blow football-related game, requiring a bowl of water, two small plastic ducks, and four contestants each with a straw. It doesn’t end well – Stuart filmed the contest, trust me, well worth a look.

Saturday at the Anchor in Bishopston was another jolly fun night; several very happy punters, one of whom was even moved to buy us all a drink Top man!

Coming up this weekend..

Saturday 9th – Queen Vic, Stroud
Oooh, the Queen Vic – one of our favourites. Plenty of room for dancing and prancing about, and they all go a bit mental. Maybe we will, too. Who can tell?.

Sunday 10th – Duke of Edinburgh, Gorse Hill, Swindon – 3pm start.
A nice peaceful Sunday afternoon – what better way to ruin it for everyone than by going to Swindon and making a horrible loud racket?