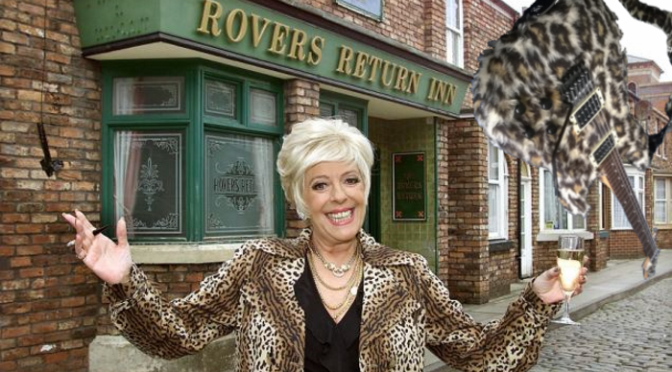 This is starting to get repetitive – another weekend, another pair of gigs – although, to be fair, Friday’s was quite a good turnaround, starting off in appalling fashion – thanks partly to the strange acoustics in the room, but mostly to my general ineptitude (particularly compounded by my seemingly astronomical inability to count to four), we had to throw in the towel on the first number after eight bars, and start it over again – but by the end of the night was huge jolly fun for everyone, due in no small part I suspect to those that enthusiastically joined in Rosa’s Drinking Game. It’s just a little disappointing that Ben and I had our hands full, so we couldn’t actually play along.

Sunday afternoon, and we all roll up at the Swan in Thornbury for another gig featuring my offspring between sets – I’ve been rather looking forward to this.

The pub’s not as busy on Sundays (funnily enough) but since there’s our lovely mates John & Anne in, we have plenty of scope to amuse ourselves.

I have decided to give my new leopard skin furry guitar another outing, having picked a winner from last week’s “Name That Axe” competition – so in honour of the brassy-but-classy barmaid Coronation Street character Bet Lynch, henceforth shall this beauteous instrument be known as “Betsy”.

A small prize will be winging its way to the winner.

Towards the end of the first set, Rosa and I are cheerfully bouncing around oblivious to each other, when she accidentally bumps into Betsy, which causes her to spontaneously emit a horrified shriek, and renders her unable to sing (or, indeed breathe) for most of the next verse. When she has recovered enough to be able to speak, all she can say is, “That took me by surprise! It was really, really fluffy…”

I think that on the strength of that alone, Betsy has earned her keep already.

Next, we wheel up Lily and the boys for a quick Polar Bear Cheese Pirates From Outer Space set, the highlight of which occurs when I hand over guitar duties to Ben so I can sit down with a beer and watch Lil and Rosa duetting through some AC/DC together… Marvellous stuff.

Finally we pile back on and play through the second set, to what I think we can describe as a small but select audience, who vigorously demand more AC/DC encores until we run out of them. The only interruption comes when Stuart announces he has to disappear off stage to go and take an emergency leak half way through.

“Is there a drummer in the house?” announces Rosa, as she does on such occasions.

Wait a minute! There actually is one tonight – my youngest Jimi has put his hand up. Rosa drags him up on stage, and a quick conflab reveals that we all know Ozzy Osbourne’s “Crazy Train”. That’ll do nicely.

Right then, coming up this week…