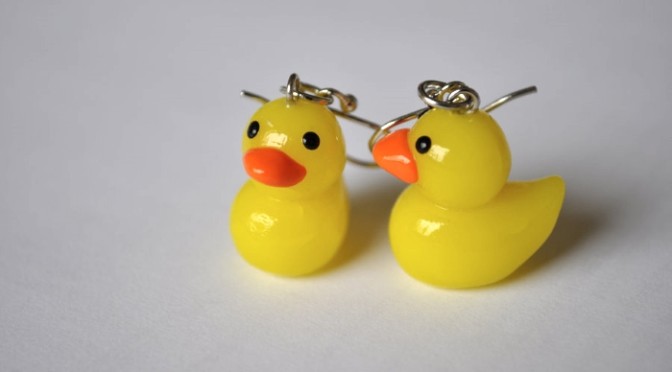 Well, we made it! We survived the muso’s nightmare that is THE STAIRS at the Rum Bar over in Chepstow on Friday night.

We’ll gloss over the fact that Ben and I got stuck in traffic so much that the 5 miles from my house to the Severn Bridge took us over an hour, and pick up the story as we rolled up at the foot of the tottering slippery ironwork fire escape that is the way in to the venue…

…In fact, the experience of getting all the kit in and set up was massively eased by the fact that much of the carrying-of-unfeasibly-heavy-equipment-up-endless-flights-of-stairs was actually done by the extremely amiable lads from behind the bar, meaning that we were a lot less exhausted than otherwise. Also, once we had reached Base Camp, the fact that our Rosa has very quickly learned the ancient craft of wiring up the PA, saved us some setting up time, leaving me with ample opportunity to faff about with choosing which toys to play with.

In the end, we plumbed for rubber ducks again, encouraged by Rosa’s inspired earring selection for the night… 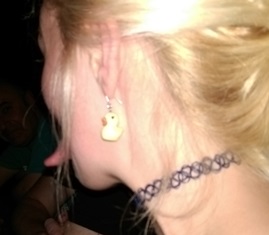 The first set was uneventful, apart from the sporadic calls of “Rum break!” between songs, so Rosa could sample the cocktail they’d kindly provided her with. She claims that even small quantities of alcohol cause her to “get very silly” – we weren’t able to verify this, though, as the line between “very silly” and “normal for Rosa” appears to be a rather fine one.
We’re very proud of her.

In the second set, things livened up some more, and we gathered a lively posse of nubile and enthusiastic dancers, which prompted Ben to play his bass behind his head for a while. As far as I can discern, this must be some kind of primitive mating display behaviour; or possibly he’s just an idiot like me, it’s one or the other.

I just wish I’d thought of it first.

I’d have been quite happy to slap his bass up the back of his head.

Finally we finished up, played a noisy encore, and then the lovely staff helped us haul all the naughty heavy equipment back down to terra firma, and so it was off into the chilly night back to Albion’s fair shores.

Coming up this weekend…

Friday 9th – Lily B at the Tunnel House Inn, Cirencester
Lovely daughter at a posh country pub – what could possibly go wrong?

Sat 10th Prestbury Sports Bar, Warminster
They’re a really nice bunch here, and it’s a nice spacious room to play in, with lots of room for jumping about like a pillock. And there’s no stairs.

Right, that’s it for this week; I would leave you with a witty insight, except that I can’t seem to think of one just now. So I’ll just leave you with a recommendation – go- right now, if you can, before you forget – and listen to the magnificent “Seventy Four Years Young” by Buddy Guy. Even if just one of you does, then this email will have brought sufficient joy into the world to have made writing it worthwhile.