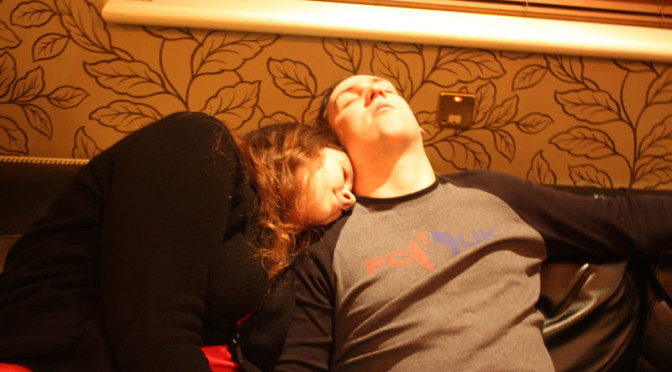 Well, that was a strange old Saturday. February 14th, Valentine’s Day, and what more romantic way to spend it than to be playing a gig fifty miles away from your loved one in the middle of Nowhereshire…?

Lou at least had thought this one through a bit, and actually brought her young man along with her; unfortunately for him, since he was the only one who actually sat anywhere near the band, this meant he got persistently harangued by their resident outspoken lady, American Mary, who spent most the evening exhorting the rest of the punters, who were hiding at the far end of the pub (and who can blame them) to “get up and shake your butts”.

We were assured that the punters’ reluctance mainly stemmed from the fact that most of them had been in the pub all day watching the rugby (and quite a few had apparently already stumbled off home before we arrived, due to being unable to stand up any longer), and so mostly they were quite “tired”. This actually might explain why, when I nipped outside at half time for a breath of fresh air, I encountered a guy lying flat out on top of a wall staring up at the stars in a state of some befuddlement, while his other half patiently explained to him, “…That’s right, love, you’re outside the pub…”

In fact, thanks to Lou’s persistent and determined rabble-rousing efforts, we eventually did get a few of the pub attendance specialistas up dancing for a while. I was impressed – I’m pretty sure it would have been easier to … anyway … We even managed to get Lou’s young man up on his feet, although this was probably less to do with American Mary yelling at him to “Get your skinny Eye-talian ass up and dance with me”, and rather more to do with me handing him my guitar to get him to play the final song of the night…

Anyways, sadly there’s no AUF action coming this weekend, mainly ‘cos Lou simply doesn’t have the time – on Friday, she’s playing with indie rock outfit Flowerpot down at the Bierkeller, supporting a Nirvana tribute band – and on Saturday, she’s out at the Trident at Downend with her duo The Loops. So, if you fancy getting yourselves along to one or other of those, we might just see you there…

*as opposed to Hey hey, my my, which is of course a completely different kettle of fish**
** Who keeps fish in a kettle, anyway? Surely it must make the tea taste a bit funny***?
*** Earl Grey Shark, anybody…? Lapsong Dugong?****
**** Yes, I know it’s a mammal not a fish, we’re kinda struggling here, you go find some tea / fish puns, then Mr Clever Clogs!