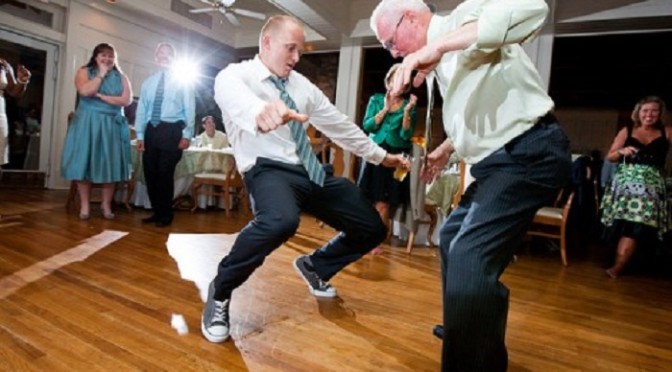 Well, as another weekend full of rawk’n’roll fun sails majestically past down the river of Time, flowing relentlessly onwards to the Sea of Oblivion, and we stand thoughtfully on the banks of the Present gazing into the distant horizon of Eternity, where the birds of Desire fly homewards to their nests of Remembrance silhouetted against the sunset of Significance, I can’t help but wish I’d remembered to put some trousers on.

Young Lily and I ventured up to Swindon on a freezing Friday night; we arrived at the Tap & Barrel to find it pretty quiet, but the folks that were there seemed nice and friendly. By the time we’d set up it was a bit more populated, and by a stroke of luck we more-or-less managed to remember the whole set. Not that it mattered too much, I don’t think they were too fussy; there was reasonable amount of singing along and jigging about, and we were even treated to some granddad dancing (imagine dad dancing, only much, much more so) from a very amiable chap, whose name remains a mystery – as was everything else he said. Full marks for incomprehensible muttering, that man! But, he seemed to be happy enough.

Okay, it’s wasn’t Carnegie Hall, but Lily has decided she quite likes this place because

a) they like us,
b) they buy us drinks, and
c) there is a chip shop directly opposite.

Can’t say fairer than that, then!

Saturday night finds us in down town Caldicot, where (after a brief search) we find the venue, haul the kit in and set up. Poor Stuart has lost his voice, so we have to be nice to him tonight, ish.

Lou breezes in, looking very lovely as usual. “Do you like my new dress?” she asks. “I only bought it today”.

We agree it is indeed very nice indeed, but since she appears to turn up every week with some description of new garment, we feel compelled to ask if she actually wears any of her clothes if they are more than three weeks old. She looks slightly puzzled.

“Put it like this”, I say, “In your house, are there, by any chance, several chests of drawers which are bulging slightly due to the amount of clothes stored in them? Do you find it difficult to close your wardrobe? Does your bedroom door have about twenty clothes hangers hanging off it, some of which have more than three items on them?”

Lou looks slightly sheepish, while her other half gleefully confirms that all of the above propositions are absolutely true.

“You see”, I explain, “You don’t need to keep buying new clothes all the time. Some of my t-shirts are probably older than you are”.

“Aha!” she counters, “So if you’ve got things you’ve kept for that long, you can hardly have a go at me for hoarding clothes, can you?”

Er – I’m not entirely sure how, but I seem to have lost that argument.

Ah well, it’s time to play now, and because they want us to stop at around eleven, we’d better crack on with it…

And it all seems to go rather well. There’s quite a few bouncing around, all night, and they even give us all our toys back afterwards. So, we’ll book back in there at some point, and, several people took business cards off us, because “Oooh, you’d go down a storm at our club, you would”; so I think we’ll call that a mighty fine night. And I was back home unexpectedly early, by five past twelve; Dem hardly had time to let the firemen out the back door.

Right, coming up this week –

Friday 30th – The Windmill, West Swindon
As far as I remember, we’ve not played here before. So maybe we haven’t. But if we have, then we’re back!

Saturday 31st – The Ram, Park St, Bristol
This will be about the third time we’ve been booked here, but I think this time it’s actually going to happen. It’s a late’ish start apparently – 10:00 or so, so I may have to miss my cocoa and bedtime stories. When I finally do get home, I’ll probably have to wake the kids up so they can tuck me in…

That’ll do for now, I reckon