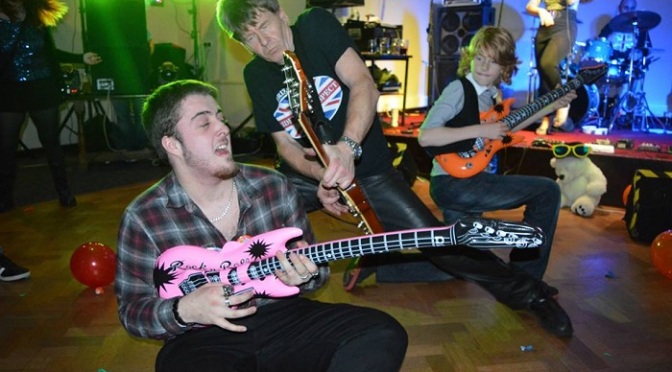 Right then, it’s late and I’m tired, so sorry, no bedtime story tonight; instead I’ll just go with the basic “weekend report and upcoming gigs” schtick, if that’s okay with you guys.

On Saturday we had an absolutely fantastic time, playing at our pal Adam’s 21st birthday bash, shared with the wonderful Anne who – er – probably isn’t 21 anymore, to be fair. But she is a fantastic lady (to be honest, anybody who phones me up to ask how the “sexiest guitar player in Gloucestershire is doing” is going to be in my good books anyway – even if it is only ‘cos they know that Lou lives in Keynsham…).

Anyways, we piled up to the gig, taking my beloved Dem and 3 smallest offspring, and had a great time with all the fantastic people who were there. Before we go to the AUF stuff, I played a half hour set with Lily and the boys, at the end of which Lil announced that “it was time we got a proper guitar player”, and Lou stepped up to replace me for the final number; this meant I got to actually stand and watch ‘em for a change. And, okay, I’m biased, but – they really were stunningly good, particularly considering it’s only their third gig. I’ve seen a lot worse bands. Actually, I’ve played in a lot worse bands – although come to think of it, maybe the reason they were a lot worse was because I was playing in ‘em…

Anyways, a brilliant night, it reminded me how blessed I am to have such a gorgeous wonderful and tolerant wife, such a fantastic and insane family, such an incredible band of mates to play with, and to be around such a great bunch of guys as we were last night. And our pal John insisted on buying all the drinks all night for the lot of us! Lovely.

Just occasionally in between charging about the place like a maniac I remember that I’m probably the luckiest bloke I’ve ever met.

Anyways, enough with the soppy, here’s a pic from the night that I think captures the spirit of the evening; birthday boy plus two idiots. And a polar bear in sunglasses. Photo shamelessly stolen from Facebook, credit to Udil for being Captain Camera for the night. 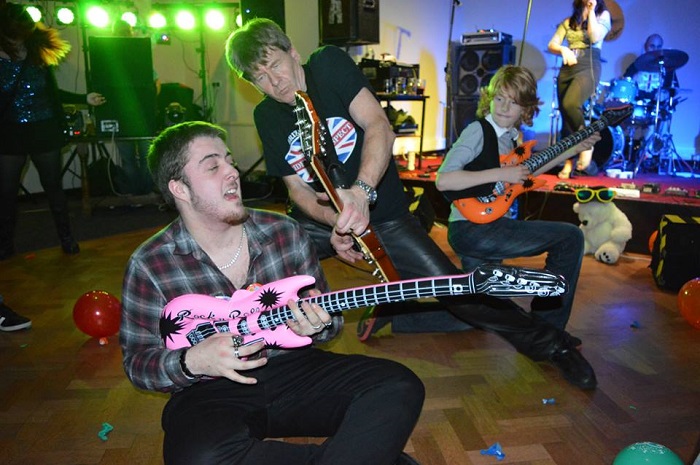 Coming up next week – Friday 14th – Lily B at the Clothier’s Arms, Stroud
Oh, bugger, good job I checked, or I’d have forgotten this one… I wonder if I should tell Lily. Great little pub, lovely peoples, and a special little corner for Lil to pass out in afterwards. I’ve just started wondering if we should up the game and bring the boys along as well and make it a full-on noisy gig. But then I guess they’d just complain they wanted Lou in to play guitar instead of me…