Well, a strange week in the World of Rawk…

With no band appointments, I went out on Friday with diva daughter for a duo gig in wet, windy, rainy Chiseldon – to the rather fine Patriots arms, where they have lots of space for musos to set up in, a handy door you can back the van right up to, plenty of power sockets in just the right places, and a very lovely crowd, who joined in, sang along, applauded nicely, and altogether enjoyed themselves so much they even bought CDs. Result!

But, by the time Saturday night came around, and the band’s gig at the Wheatsheaf in Stratton, I was completely knackered as a result of spending the entire day running around moving furniture and stripping wallpaper and the like, ready for next week’s New Kitchen Excitement. Well, Dem’s quite excited. I contented myself with scrawling in red ink on the bare wall, for the benefit of future occupants of the house, “BEWARE THE EVIL! LEAVE THIS PLACE NOW”.

I think it will cheer up whoever has to redecorate that kitchen next, don’t you?

Anyway, being knackered is my excuse for playing like an arthritic baboon at the gig. I don’t know what Ben’s was, and Stuart was obviously keen to show off his new stick-juggling skills. Lou, on the other hand, was doing magnificently well until she forgot the lyrics to an entire song. Still, we pulled it off by dint of being lovable, and (I like to think) rather dashingly attractive.

Just how attractive, we’ll find out next Saturday – but first, a short message from our sponsors…

Friday 14th – Lily B at the Royal Oak, Swindon Old Town
Well, since she’s gone to the trouble of actually rehearsing (okay, once), we might as well make the most of it. And we know a good chippy just around the corner. So, if you fancy a romantic Valentine’s night in Swindon with your loved one – and who wouldn’t? – why not come and have Lil sing a few soppy acoustic ballads for you both, before we hit you upside the head with some Guns’n’Roses?

Saturday 15th – The Anchor, Bishopston
Lou will be issued with lyric sheets, Stuart will have his drumsticks super glued to his hands, and Ben and I… will probably have been replaced. So nothing can stand in the way of a jolly fine night of rock’n’roll classic mayhem. With rubber chickens, plastic bath ducks, and a sock monkey.

Thas’ your lot for this week, I leave you with this “strange but true” photo of Stuart – pay particular attention to the bag on the left… 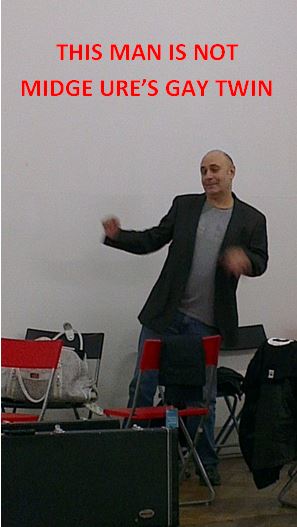