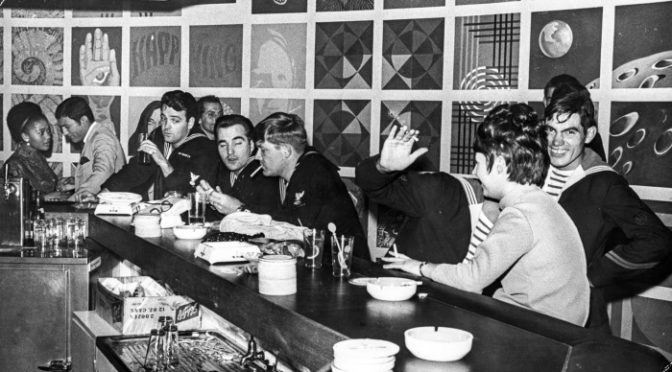 Winter draws on, I see – although frankly, vicar, I don’t see what business it is of yours – and I have to report a very, very messy weekend’s gigging.

Friday night at the Woodland’s Edge, and our poor Emma turns up looking very unwell indeed, having picked up a nasty stomach bug from somewhere. “I’ve not tried singing yet today”, she tells us, “just in case it makes me vomit”.

As we start loading in, it is apparent that there is a plague of yoofs upon this house, boisterously ensconced right next to where we need to set up. I’m sure their mummies love them, but they’re a pain in the arse for everybody else.

Poor Ben is stuck with them for the night on his side of the stage, so constantly has to try and stop them treading on cables, falling over mike stands, spilling beer on expensive equipment, and accidentally getting punched in the face. It’s not easy.

At least Emma is feeling rather better once we get started, and we manage to get through the first set without incident.

Partway through the second, disaster strikes as one of the arsehats drops a pint right in front of me, leaving my pedals awash in lager and broken glass. Over the course of the next two songs I watch as the indicator light on my overdrive pedal begins to glow ominously, despite being switched off, as the foul fluid seeps across the circuit board, shorting out the switch contacts…

Luckily I’m able to remove the pedal from the chain before any hideous screaming noises happen, and finish the set without it. THIS is why we never have use any mains power at the front of the stage.

By the next night, Emma is feeling much better, and following an hour’s careful cleaning and half a can of contact cleaner, my overdrive is happy again, so it’s off to the noisy Trout in Keynsham – another notorious haven for pint-spillers.

In this case, however, although a lot of beer goes over the floor in front of us, the only thing that actually goes all over my pedals are (a) an entire pint of water, which doesn’t seem to do any harm, actually washing off some of the lager from last night, and (b) a rather jolly lady, who somehow as she falls and lands manages to switch off every pedal that was on, and switch on every one that was off. I almost feel guilty as she is being bodily lifted away that, instead of helping her up, I am feverishly tap-dancing beneath her supine form to get the sound back on track.

Didn’t miss a note, though 🙂

After the gig, Emma goes one better than even her previous “sultry temptress coiling up speaker cables properly” performances – having acquired a cloth from behind the bar, she is now actually wiping the cables clean as she coils them up. Ohhh, it’s magnificent to watch! There must be a specialist website somewhere for this kind of thing.

We now have a couple of weekends off coming up, which will give me a chance to repair and clean up various bits of damaged and beer-soaked musical equipment and peripheries.

And for Ben to try and get some sleep, in between dreams of bronzed cheerleaders lasciviously cleaning the lime jelly off of cables as they oh-so-perfectly wind them up into immaculately regular coils, and neatly fasten each one with a perfect clean cable tie…

We’re not weird, you know.