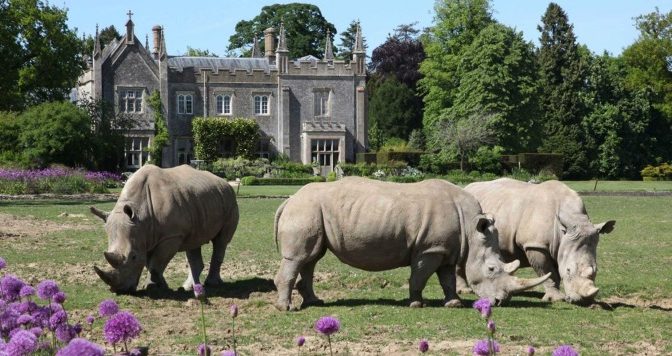 When we reached the pub and walked in, the following sight met our eyes… 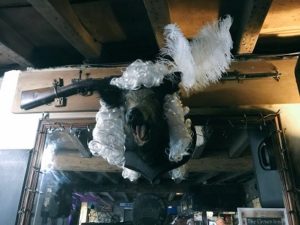 Our minds were immediately set at ease – these are people who will understand us. [Editor’s note: Now, I personally do not approve of decapitated heads on walls, pigs or otherwise but I guess I’ll go with the sentiment, gotta call it out just the same!]

And, it turned out to be a jolly fine evening, they were up and dancing from the off, they joined in nicely with Emma’s Drinkng Game, and afterwards they we got lots of very nice compliments. And some money. Best of all, we got some beer, too. We’re rather looking forward to coming back.

If only I hadn’t played like a twat-handed fumblemonkey*, they’d probably have liked it even more.**

Coming up this weekend – one or two gigs, we’re not quite sure ourselves.

On Saturday, we are most definitely playing a 40th birthday party bash in Compton Bassett.

On Sunday, we are booked to play at the Sandringham in Downend; however, we’ve been told that the gig may not be able to go ahead, as the pub is having some “budget issues”, and has to wait for their senior area financial manager to come back from holiday before they can give us the definite green light. We’ll find out in a day or two. Obviously our fees have now become so eye-wateringly reassuringly expensive that we are in danger of plunging the mighty Ember Inns financial empire into bankruptcy. I feel rather proud, actually. [Editor’s Note again: It’s a go for this gig but starting at 6pm.]

Anyways, we’ll keep y’all posted on that one.

Although – here’s a thought – if enough people were to phone the pub between now and then “just to check whether Angel Up Front are playing next Sunday”, it might sway them towards actually paying us more.

I have to go now, I’ve suddenly realised I have a lot of different voices to practice…

*This, and many other custom-made derogatory conjunctions are available from our new website artisan_insults.co.uk. Lovingly hand-crafted personalised insults for your loved ones, friends and work colleagues, for very reasonable rates. From the people who brought you “Stumpy McFuckwit”.

**Actually, no they wouldn’t. The thing that went down best was the Ramones cover we accidentally learned for a laugh a fortnight ago. And to think I spent years trying to work out how to play guitar solos in Phrygian mode…

A late announcement – while we’re here promoting fine music – next Monday (20th), down at Mr Wolf’s in Bristol centre, there’s a rare chance to catch my beautiful daughter Lily playing a solo gig. I highly recommend getting yourselves down there. The other night, she played me the new song she’d just written – it was stunning, and I’m not exaggerating when I say that by the time she finished, there were tears rolling down my soppy face.

She looked over and noticed; “Are you crying…?” she asks gleefully, and punches the air… “…Yes! That one works, then!”

I appear to be some kind of quality control guinea pig. Always figured I’d be good for something…