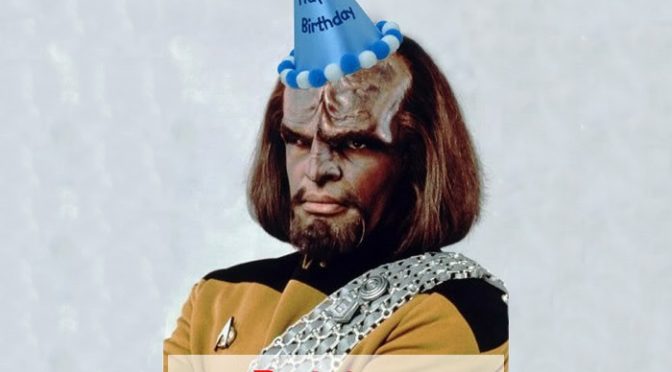 I’ll keep this one short again -’cause the sun is shining in the garden, and there’s a beer waiting for me.

I’ll just briefly tell the tale of Saturday’s escapade to the Lamb in Marlborough – being just a couple of days shy of Ben’s 30th birthday, we figured this would be the best time to give him his pressies.

Now, I think it’s fair to say that our Ben is just a teeny tiny tad geeky, so he was immensely pleased when Emma presented him with a special set of many-sided dice, fantasy role-playing games for the use of. He did later admit that he already owns around a dozen sets of said dice, but that nonetheless these ones were absolutely necessary, as they’re especially shiny.

I, on the other hand, attacked his geekiness from a different angle – since last Christmas I managed to find him a t-shirt that combined both Star Trek and bass playing, I had to somehow top that. And I think I managed… 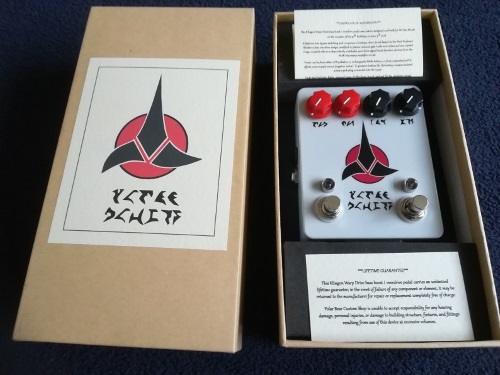 Yes folks, it’s a bass effects pedal, custom built for Ben, and with all the controls labelled in Klingon. I was rather proud of myself for making this – the culmination of several weeks of happily scribbling circuit diagrams and painstaking soldering bits together, and two entire (and extremely vexing) evenings at the laptop, trying to find the right word in Klingon for (for example) “volume”, and cross-correlate it to make sure the translation back into English was correct, then have to find the correct combination of keystrokes to use to get the Klingon font I found show the right symbol…

Did you know that there are about seven dialects of Klingon, and several different Klingon alphabet font sets, which don’t properly correlate with the online Klingon dictionaries?

Oh, how I cursed those geeks… they really should find something useful to do.

Anyways, well received though this present was, Em still won by providing a magnificent cake.

Now, why didn’t I think of that?

Anyhoo – coming up this weekend, we’re playing a wedding on Saturday (best dig out me posh frock) and on Sunday…

Sunday 10th – The Crown, Staple Hill
Nice and local, and with a 6:45 start, a nice early finish too. We very much enjoyed it here last time, and are expecting to do the same again this time. But with maybe just a hint more silliness. And a bass overdrive pedal; in bloody Klingon.

PS – since I now have some spare time coming up, and all the necessary kit, if anybody out there happens to want a custom built effects pedal built, let me know and we can talk terms. As long as the labels are in English…