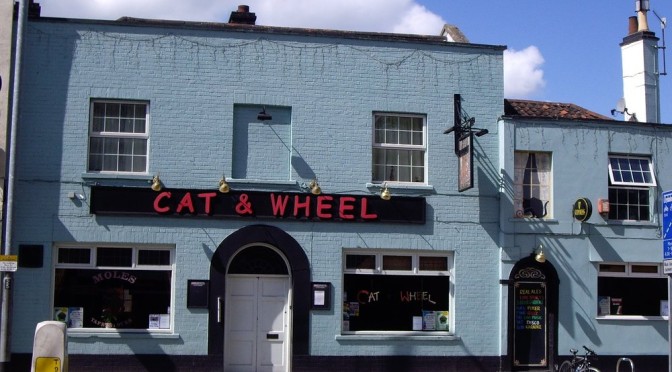 Another weekend, another fantastic time…. Friday night, and since it’s my beautiful Dem’s birthday, we have persuaded her to come along with us to the Cat & Wheel, with daughter Lil as an escort. (That’s not in the sense of “working as an escort”, you understand, just “escorting Dem”. I mean, the extra cash always comes in handy, but everybody needs a night off now and then…)

Anyhoo, my lovely two were just into their second pint, and the kit was just about set up, when our ol’ pals John & Adam rolled in, and in true chivalrous fashion took charge of supervising the girls’ alcohol intake for the evening – with extremely successful results.

All in all, everybody had a delightful night, some more pals had sneaked in over the border from Wales to wish Dem a happy birthday, and various other accomplices from days gone by turned up too…

Towards the end of the second set, after had Rosa led the entire pub in singing Happy Birthday to Dem, and Lily had stepped up to sing a delightfully drunken version of Highway to Hell with us, I was looking around me with a big silly grin on my face, playing noisy rock and roll with my best buddies, daughter bellowing away magnificently next to me, with our adored Rosa and my beloved Dem air guitaring away right in front of us, in a pub full of happy smiling faces bouncing about, when it suddenly occurred to me that I’m actually getting paid for this…

I’m pretty sure I’m the luckiest bastard I know.

Right then, coming up this week, more fun and frolics and talking …bananas..?

Fri 26th – King William IV, Combe Road, Bath
Not been here before, so we’ll have to see what they make of us. We shall be having a brilliant time, I’m sure; we’ll leave it up to the locals whether they want to join in and have one too.

Sat 27th – Tap & Barrel, Swindon
Not been to Swindon for a while, although I have played this place with Lily a few times in the past year or two. The place seems to have a number of resident keen drinkers, so there’s likely to be a fair degree of entertainment on offer from our point of view; let alone our collective simpleton-like ability to amuse ourselves for hours on end with, for example, a small piece of cardboard…

Square on, and peace out
A