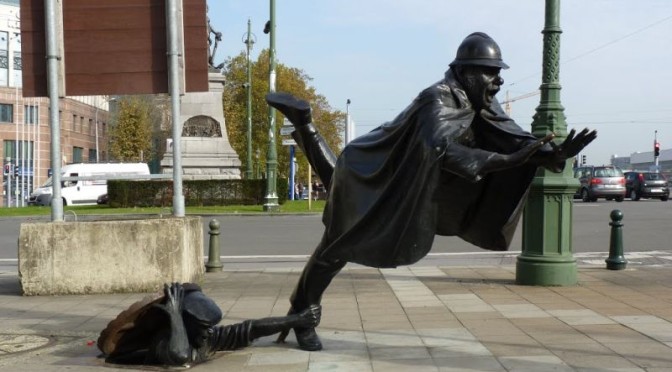 Right then, this week we had what should have been a straightforward gig at the Jolly Cobbler in Kingswood; after a lovely sunny day relaxing, I was gently driving my way gigwards around ten past eight, when my phone rings. It’s Stuart.

“You do know we’re supposed to start playing at 8:30, don’t you?” he asks in slightly stern fashion.

“About five minutes”, I tell him.

“Well, best hurry up, then”, he observes, and hangs up.

So, I am soon squealing to a halt in the car park, there is much hurried unpacking and frenzied hauling of kit in through the doorway, squeezing past the inevitable smoking-and-chatting idle pair who are absent-mindedly and yet determinedly blocking it (what IS the attraction of doorways?), and with rather surprising efficiency, we are all set to go only a few minutes late.

After a dodgy couple of songs (no sound check, and idiot Alan has forgotten which controls are which on his amp), we settle down, and soon have the audience merrily playing along with us; at half time, a pair of very nice chaps insist on buying us all a drink (thank you gentlemen!), and the second half is soon characterised by the usual dancing silliness from the audience, including this years’ award winner for Loveliest Assistant Percussionist, and also unfortunately the award-winner for Clumsiest Bastard, as a wayward punter decides to joins us up on stage, kicking not one, but two pints over my pedals. Luckily it was only water, and, having played this game before, I have all my pedals mounted on rubber feet to keep the tender electronics bits out of nasty puddles. Nonetheless, I was quite tempted to send him back to his seat on the end of my boot, just on general principles, but in the end I forbore the opportunity. Next time, though…

All too soon, it was run-out-of-time time, so we dusted off a quick Led Zep encore, and started packing up the dripping equipment.

Hokay then, coming up this week – well, not much, actually, Lou is off with her Flowerpot chums doing a few gigs around the place, and I’m taking lovely daughter Lily out to a rather nice pub in the country for a bit of acoustic action; this is on the assumption that I can find my acoustic…

Friday 14th – Lily B at the Mermaid, Burford
The now traditional how-does-this-one-go-again? acoustic number memory test – plus there is a possibility we might even sneak in a ukulele duet, but only if we can find a suitable song. Obviously, anything by Motorhead would fit the bill a treat, but I’m open to suggestions…

This one is harder than it seems – it is to come up with rock song titles for bakery and biscuit enthusiasts. It’s actually a lot harder than it sounds, we were all struggling after a few howlers, so I figured we should see if you lot can come with anything better.

Examples so far include

Oh, you get the idea. Send in suggestions, and we’ll email the lucky winner a genuine picture of a five pound note.