Well, I like to think that was a well-deserved weekend off for the band; personally, I had a rather lovely time, ‘cause it meant I could kick back and enjoy my 25th birthday (not for the first time).

In fact, I was lost for words when I got into work to find, in addition to the usual array of “embarrassing” photos from my past displayed all over the office, the balloons, and the inflatable zimmer frame (you see, I’m lucky enough to work with the nicest bunch of bastards you could ever wish to meet), perched on top of a bespoke birthday cake, this absolutely fantastic rendition of myself, lovingly crafted from finest icing sugar… 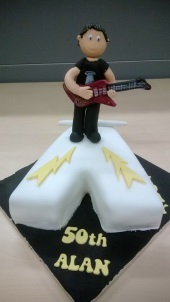 So, vast enormous thanks go out to our pal Disco Dave’s sister who crafted this masterpiece, and to everyone who sent good wishes. I was actually quite touched (and not in a sleazy ‘70’s Radio 1 DJ way, either. I saw you smirking at the back, there).

In other news; Stuart’s other band, the rather fine politically-motivated alt-rock outfit The Real Kings Of Spain are playing on Thursday down at the Fleece in Bristol. Git yourselves down there and help smash the state in a socially responsible dancey sort of a way.

The following night, the AUF rock machine rolls into the spiritual cradle of rock’n’roll that is Emerson’s Green…

And, on Saturday, we’re playing at our pal Linda’s birthday party, which should be a hoot, and possibly even a hoot with jelly and ice cream – we’ll let ya know….

Finally; I was slightly hung over yesterday morning, and commented ruefully that maybe it was about time I started acting my age.

“Don’t do that, Daddy”, youngest offspring tells me, much concerned, “You’ll die.”