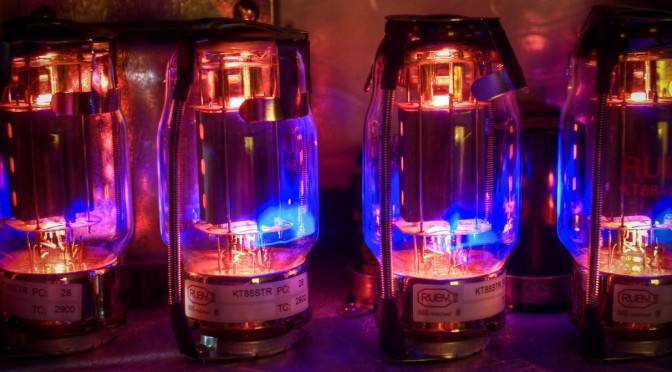 Well, that was fun; as it happened, we ended up playing 2 gigs this weekend, since we got a call to cover a cancellation on Friday at the Red Lion in Paulton, way down in deepest darkest Zummerzet. We were set up at one end of the pub, while the bar and all the punters were down half a flight of stairs; having played this kind of set up before, we knew that it was going to be hard work dragging the punters up the stairs to join us. As it turned out, it took us until nearly half way through the first set before Rosa succeeded in bullying them to come up and start enjoying themselves.

By the time we had a good bit of momentum going, disaster struck – in the form of a horrible squealing coming from my amp. Not the usual horrible screaming, either; this was truly awful, and Stuart (who had the amp perched right by his earhole) was wincing in pain. Nonetheless, I figured I’d better do something to remedy the situation.

So, a cheery Saturday morning was spent disembowelling my rig, and trying to work out which of the 6 valves was being naughty, and which of the four spares I had lying around, (half of which are knackered, but I don’t know which half) to put in its place. I managed to guess which was bad, and replace it with that turned out to be good first time. I make that odds of 12 to one, so I was rather pleased with myself.

I was less pleased, when, hoiking the amp back into the van, an agonising pain shot across my spine, down through my leg and across the road to the bus stop. I had somehow managed to tear a muscle in my back, and it was a couple of minutes before I could breathe again, and even then I couldn’t really manage to swear satisfactorily. So, now my rig is working, but I’m not…

Saturday night, and buoyed up my massive doses of painkillers, it’s off into the night to the Jolly Cobbler in Kingswood. And, it did indeed turn to be jolly… er… jolly, and not at all cobblers.

When I rolled up, Stuart and Rosa were already there, setting up, so we (rather circumspectly, in my case) hauled the kit in and busied ourselves setting it up, tripping over cables, treading on each other’s toes, etc. We’re just about done, when Stuart notices that Ben is not present.

“Have you heard from him?” he asks me.

“Nope, since my house is the other side of his flat from here, he’s hardly going to come via mine. Have you got any messages from him?”

It transpires that Ben has tired of waiting to see if Stuart was going to pick him up, and is making his own way over. I have to remind the grumpy sod when he arrives that the upside (not having to hump any heavy kit about) more than makes up for being forgotten about…

The place turns out to be quite lively, there are quite a few bikery types in, and we even get Jesus playing a guest spot on tambourine for us. However, he is soon eclipsed by seventy-odd year old Eddie, who jumps at the chance to play air guitar, and who leaps about in fine fashion.

All too soon we hit the noise curfew and have to pack it in, pack it up, and haul it out; then we decide that we’ve earned ourselves a cheeky beer before we go, and get chatting to one of our very nice dancing ladies for the evening.

As she’s chatting away, one of her pals brings her over a pint of lager.

“Oh, I don’t want that”, she pronounces airily, “This is the band. I’m talking with the band now. Bring me a Jack Daniels instead.”

“You have a lovely voice” she observes, “And you’re very young, aren’t you? How old are you?”

“Is he your granddad?”

Rosa is slightly nonplussed, Ben and I are collapsing with laughter. Stuart is a little bemused.

“Only twenty three…”, considers the birthday girl, and then suddenly waves an accusatory finger at Ben, Stuart and I.

“You lot keep your hands of her, do you hear? She’s too young for you, it’s not right. Leave her alone. Bloody perverts…”

Rosa’s nonplussed-edness is now total and complete, Stuart’s bemusement is enough to fill an entire arcade, and Ben and I can hardly breathe with laughter.

And finally it’s off home, to think pure thoughts, and to indulge in a small bottle of whiskey (for the pain, you understand).

Right then, coming up this week, just the one on Saturday – but it’s a bit of a doozy…

Saturday 6th February – Queen Vic, Stroud
Lovely lovely fun; assuming my back has repaired itself, and my rig doesn’t commit hara-kiri again, there’s oodles of scope for prancing around and silliness. Can’t wait…

What do you call a Chinaman who refuses to wear slip-on shoes?