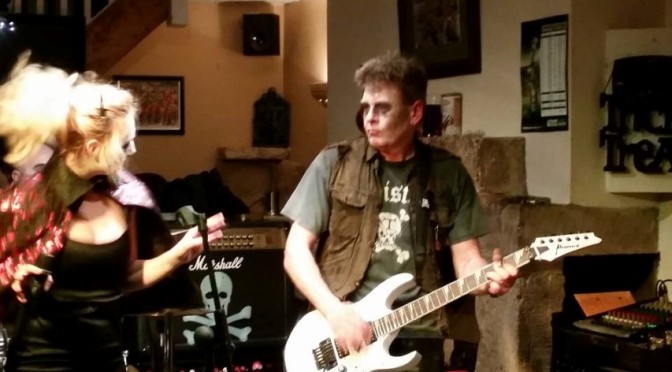 And, after a whole week away (for me at least spent in sunny Franceland, many miles away from the nearest guitar), Saturday night at the Old Neighbourhood near Stroud was always going to be an interesting evening… Would I remember the songs? Could I actually manage to play them? Had I ever been able to? And what were they anyway?

Such minor concerns were swept away by the more important questions of what to dress up as. Despite being in possession of a large case of assorted Halloween costumes, wigs, and masks, I remembered from previous years that actually while wearing them you can’t see, you can’t breathe, and, most importantly, you can’t drink. Accordingly it was off to the local cheap’n’nasty shop, to invest a whole pound in some kiddy face paints. Then it’s just a case of bribing daughter to creatively apply them to create a suitably undead appearance, and then dig out some torn-up clothes to complete the zombie effect. This last bit is easy; I go the bottom of the drawer for my old biking cut off, which even after all these years still carries the faint aroma of “beer, engine oil, and every conceivable body fluid”.

When we arrive at the gig, I find that Stuart and Rosa have opted for a similar look (admittedly minus the dubious health-hazard clothing); meanwhile, Ben has gone for an all-black combo, with long leather coat and cowboy hat.

We’re delighted to find our buddies John and Anne waiting for us; soon joined by Trev and Sue, and the pub is soon throbbing merrily; most people are dressed up, including one bearded, vest-clad burly chap with long claws that Rosa announces as “Ladies and gentlemen, I give you Edward Scissorhands”.

As indeed he is.

Rosa is mortified, but not as much as when she realises after the first set that she has inadvertently transferred much of her black lipstick, via her mike, onto her white face make up, resulting in a rather fetching wire mesh pattern being daubed all across her chops.

“Why didn’t you tell me?” she demands.

I consider trying to explain that we were somehow unable to communicate this complex message via sign language in the middle of songs, but settle for laughing instead.

We blast off through the second set, having a thoroughly lovely time, and then suddenly we’ve run out of time, but that’s okay because we’ve also run out of songs, and in addition, Ben has also run out of breath.

All in all, a lovely evening’s entertainment, you should’ve been there; some nights I still can’t quite believe we get paid to have this much fun.

And there’s more to come…

Saturday 7th – Crumpled Horn, Eldene, Swindon.
Just in case you didn’t know where Eldene was, I’ve just checked back, and apparently I played a duo gig here with Suzi several years ago. According to my notes, there was a birthday party on at the time, for a one-year-old, and the place was full of raving drunks; and apparently “only one, disappointingly small, fight”. Can’t wait…