Well, that was a rip-roaring entertaining weekend!

Firstly, a massive thanks to our pal Anne for inviting us to play at this year’s Ride Of Respect in Abingdon; having worked for months to organise the whole event, we think she deserves a rest now, but is unlikely to get one…

We’d arranged to play the Saturday night gig (for all the riders, stewards, and various other ne’er-do-wells who camped over the night before), and camp over ourselves, too – meaning no tiresome staying-sober-enough-to-drive-home was needed. So, with malice aforethought, Ben and I stashed as much beer and cider as we could shoehorn into the vehicles in between amplifiers, carefully trying to avoid remembering we would have to be up and setting up equipment again at 7:30 the next morning.

We arrived just in time, to be informed that “an arrangement” had been made with the bar staff, meaning free beer for the evening. Result! Alas, by 10pm we had run them out of real beer; on reflection, this was probably just as well. Thus we finished the set tolerably sober, loaded the kit back into the van and stumbled back to the tent to open negotiations with a crate of Sptifire, plus a stack of cans of cider, and various other beverages that magically appeared out of Lou’s backpack. Before long the acoustic guitars got hauled out, and we set about annoying the neighbours with shambolic renditions of songs we don’t know, until, somewhere in the wee hours, it was time to crawl into the sleepy sacks.

Somewhere around six in the morning, we discovered that the neighbours were in possession of an air horn, and a keenly-honed sense of humour. Ouchie.

Outside was cold and misty, but there was the miraculous and unmistakeable whiff of coffee in the air, so Ben and I shambled over to find a small stall selling breakfast. Eating looked a bit difficult, so we carried a band’s worth of steaming beverages back to the tent; although I spilt a considerable amount on account of my hands shaking uncontrollably. This does not bode well for fretboard pyrotechnics in front of several thousand people due in an hour or so…

Still, somehow we got ourselves together, got the kit correctly set up, and as the morning turned into a very hot and sunny one indeed, I actually started to feel much better, apart from the fact that somebody had broken in to my tent in the night, stolen my brain, and replaced it with one from a complete idiot.

When we came to start playing, I think we actually did okay, I left my fingers to do all the hard work while I just grinned inanely at the scene in front of me – one of the most marvellous ways to spend a Sunday morning is playing kick-ass rock over a rolling sea of motorcycles gleaming in the sunshine.  This is how it looked from the other side, pic courtesy of our buddy Swindon Al. 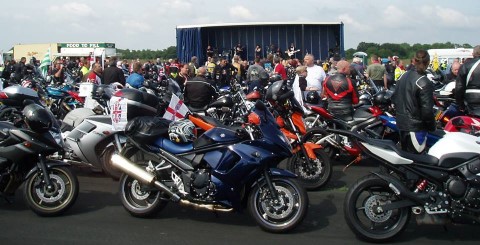 A closer look at the musicians on the stage reveals tactical use of shades to limit hangover damage – note that out of the four of us, we had one “no hangover, didn’t drink much actually”, two cases of “jaded and somewhat befuddled”, and only one ”seriously properly hung over, but trying to brave it out”.

Can you spot which one is which? 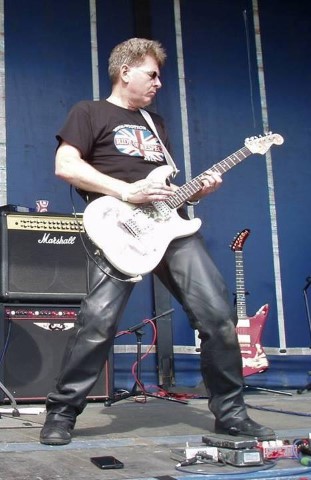 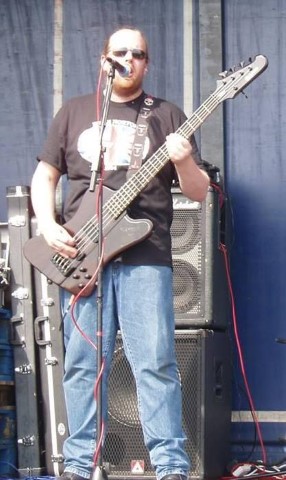 Anyhoo, despite the self-inflicted damage we had a marvellous time, and my even have recovered our senses enough for a Bristol double-header this weekend: –

Friday 6th- Langley Arms, Emerson’s Green
Last time we played here, they asked us to defer starting playing until a dinner party in the back room had finished and left the premises, because, “Well, they’re mostly quite elderly, and we don’t want you killing any of them”. I should really have pointed out that half the band is somewhat elderly as well….

Saturday 7th – Portcullis, Fishponds
The one on the High Street. Opposite Morrisons. Not the other one a mile up the road. Just so’s you know.

Right, that should do you for now. I’m for to a nice warm comfy real bed, that doesn’t clink with empty bottles every time you move in the night… …and no air horns.